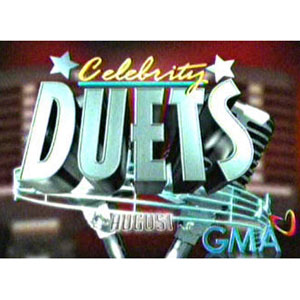 Viewers can start voting for their favorite contestants in GMA-7's singing competition for non-singers, Celebrity Duets 2. One of the eight celebrity contenders will be eliminated in the September 6 episode of the show.


The electrifying second season of the singing competition Celebrity Duets continued as the eight celebrity contenders performed another set of songs that shall be the basis for eliminations starting next week.

The panel of judges—comprised of musical director, composer and arranger Danny Tan, stage and TV director Freddie Santos, and reigning Celebrity Duets champion Tessa Prieto-Valdes—gave a mix of positive and negative comments after each celebrity performance.

First up was the ever-statuesque Melanie Marquez who sang the jazz staple song "Fever" with the sultry diva Vernie Varga. For their performance, the femme duo came out looking particularly sexy in striking red gowns and carried most of their duet amid an equally fiery couch backdrop.

The singing chef, who was praised for his energetic performance the week before, unfortunately went through a lyric blip last week, which for the most part didn't go unnoticed by Danny Tan.

MMDA chairman Bayani Fernando, who was also praised last week, was paired this week with the singing doctor Nonoy Zuniga. Both donned matching coats and gave a jazzy performance of the ‘70s song, "You'll Never Find Another Love Like Mine."

"Nadala na rin, ‘e," said Direk Freddie. "Kasi napansin ko yumuyugyog na ngayon si BF. Last week, talagang nine-nerbyos pa, ‘e. Aba, ngayon may kasama ng shakey-shakey," he reasoned. "Okay ‘to ha. I think finally you're starting to really warm up to this, which means you can only get better from this point."

Tessa was undeniably cheering and hooting after Phil's performance. "That song is so cute, and you're so cute! I hope you last also until the end, okay?" she told Phil.

With his more relaxed singing, it seemed that Phil's performance was enough to convince Direk Freddie. "You came on there, you enjoyed yourself, you gave yourself focus...This time around, the thumb is all the way up for you," said the judge, who didn't approve of Phil's performance the week before.

"You're more relaxed tonight, better than last week," observed Danny Tan. "When you're relaxed, you tend to perform better." He added, "I think all you have to do is stand there, and you get all the votes," he joked. To this, Tessa laughed heartily.

Beauty queen Carlene Aguilar performed next with SOP's Aicelle Santos for the Colbie Caillat song "Bubbly." Not only did the girls blended vocally, they also meshed well on-screen because of their matching printed orange halter-tops.

Tessa seemed to have the same positive opinion. "It was so cute!" she happily exclaimed. "Aicelle has super voice. And you kind of blended with her, which is good. Give your all. Perform like it's your last performance," she advised.

Designer JC Buendia, however, opted for a different kind of performance. Besides designing a custom-made gown for his partner Jinky Vidal of Freestyle, he also sang a Broadway classic from West Side Story titled "Tonight."

But JC's Broadway effort didn't go all too well with the judges. "I think you were pushing too much vocally," Danny Tan pointed out. "So parang, nagsha-sharp, nagfa-flat...mostly sharp. Konting control. Wag masyadong mang-gigil," he told JC.

"Too early to sing naman broadway," Tessa remarked. "Ang hirap! Stay away from ballads. I know how that feels. Siguro mag-ballad ka in the middle, okay?"

Beauty and wellness guru Cory Quirino stepped up to the game and sang "Bailamos" with Jukebox King Renz Verano. Cory and Renz pulled a Latino-inspired number—with Cory wearing red roses in her hair and Renz in a black tuxedo holding a single-stemmed red rose. To complement their production, back-up dancers also filled the stage.

Last to perform was comedian and actor Joey Marquez. He gave an energy-laden performance of "Babaero" with the song's original singer-his partner Randy Santiago.

"Next to Phil, I also like you," shared Tessa. "Ang galing mo! I love that song. It's so bagay. Talagang this is Celebrity Duets! Galing kayo mag-duet," she told Joey.

Next week, the first round of eliminations shall take place on the concert stage as the voting lines have officially been opened. Don't miss another exhilarating episode of the musical competition Celebrity Duets 2 next week after Pinoy Records on GMA-7.