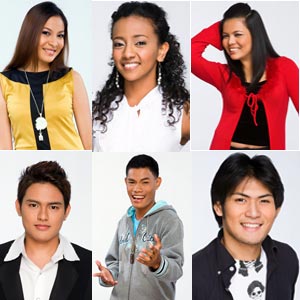 
Pinoy Dream Academy Season 1 launched the careers of multi-platinum artist Yeng Constantino and singer-turned-actor Jay-R Siaboc. Can the final six scholars of Pinoy Dream Academy Season 2 reach (or even surpass) the achievements of their predecessors? PEP (Philippine Entertainment Portal) gives the lowdown on the remaining contestants of the ABS-CBN singing reality show.

Forget the rumors about his sexuality or the unnecessary comments about his less-than-appealing looks. Jay "Bugoy" Bogoyan is, without a doubt, is the competition's best male vocalist. What's even more exciting is how Bugoy had no previous singing background. This 18-year-old college undergraduate is the only scholar who managed to break Liezel Garcia's three-time Star Scholar run. Bugoy also has the distinction of having the highest score for a trio performance ("Yesterday," with Van Pojas and Hansen Nichols) and a duet ("Muli" with Vina Morales). While Bugoy is only second to Liezel in terms of score average, he is so far more consistent; having been excluded from the top three only twice.

At his best, Bugoy is an engaging performer with the most mesmerizing voice. In fact, his "I'll Make Love To You" and "Yesterday" are perhaps the season's most memorable and successful performances to date. At his worst, as in his rendition of "Nakapagtataka," he still managed to impress the judges. His diction and stage presence are his most obvious waterloo, but these never hindered Bugoy from delivering a show stopping performance.

On paper, Liezel Garcia is already the clear-cut winner of PDA Season 2. She has the distinction of being the first Star Scholar of the competition; in Season 1, it was Yeng Constantino who got the highest score, and everyone knows that she went on to become the most successful alumna of the first batch. Liezl has the highest score average and has been named Star Scholar the most number of times. Yet, while Liezel is arguably one of the two best female vocalists in the competition, she lacks the confidence as a singer and as a potential celebrity. Liezel also failed to sustain her winning streak at the latter part of the contest. But, despite these, the Pride of Puerto Galera is still one of the favorites to win this competition.

Although Liezel lacks stage presence, making her latter performances predictable, her voice more than makes up for it, judging from her rousing renditions of "Listen," "Count On Me," and "So Much Love." Even her less successful songs earned praises from the judges, proving that, even with her least inspired performances, Liezel has the making of a true singer.

Laarni Losala was more popular for her onscreen antics than her singing. Earlier in the contest, Suldan Kudarat's "The Independent Woman" was under fire due to her numerous crying fits and arguments with a number of her co-scholars (particularly Iñaki Ting and Bea Muñoz). But while she managed to land in the weekly top three prior to the announcement of the Headmaster's List of Ten, Laarni made her mark during the 7th Gala Night, with her flawed but nonetheless remarkable rendition of "Di Ko Kayang Tanggapin." It was surprising that Laarni was able to make the April Boy Regino hit sound fresh and exciting. However, it was more surprising that the mentors failed to recognize Laarni's efforts when she was nominated for probation for that same song. Thanks to the face-off challenge, she was nominated for probation despite getting the fourth highest grade for that week. But the mentors chose to save Bunny Malunda, that week's lowest ranking scholar, instead, earning the ire of loyal viewers.

That Laarni got the highest percentage of text vote for that nomination (an overwhelming 72.74 percent, a remarkable gap considering Miguel Mendoza, who had previously managed to score an impressive text vote lead of his own, was also on probation that week) is a clear indication that the voters felt she did not deserve to be on probation. An even more impressive feat: Laarni is the only scholar besides Jay Bogoyan and Liezel Garcia to get the title of Star Scholar for an individually-graded performance. Forget that her version of "Bohemian Rhapsody" was forgettable. At her best, Laarni is clearly one of the few scholars in the Academy who deserves to be called Grand Star Dreamer.

Viewers expected great things from Miguel Mendoza, this season's contestant with a previous reality singing show background (reminiscent of PDA Season 1's Ronnie Liang). After all, he managed to finish fourth in ABC-5's Philippine Idol. So it's frustrating that Miguel, one of the contest's early frontrunners, struggled to reach the final six, as if his experience on stage didn't give him any advantage. Miguel's best performance so far was during the 1st Gala Night, when he sang Luther Vandross' "A House Is Not A Home." Afterwards, however, he failed to follow-through, as he consistently gave safe, predictable, and bland performances of not so well-known ballads.

Even the grade of 9.06 Miguel received for his trio performances with Laarni Losala and Apple Abarquez was not impressive; performance master Joey Reyes felt the trio's diverse personalities were evident onstage. He was also constantly outperformed by vocally-weak contestant (like Christian Alvear and Iñaki Ting). And even his "Sandra" during the 11th Gala Night failed to excite, although he had already performed the song on Philippine Idol two years ago. Instead, he was relegated as the primetime show's filler, thanks in part to co-scholar and real life partner Bea Muñoz. Instead of showing of his singing prowess, Miguel and Bea merely showcased to the public their problematic and unusual (they're in an "open relationship," a fact Bea paraded in talk shows after she was eliminated). As a result, among the six remaining scholars, Miguel had been placed on probation the most number of times.

Like Ronnie Liang, Miguel's previous reality show stint may prove to be an advantage. Miguel has managed to survive expulsion thrice due to his overwhelming text vote victories (75.97 percent against Iñaki's 24.03, and 74.85 percent against Bea's 25.15). And while he is yet to show it, the mentors and the jurors believe Miguel has to vocal capacity to tackle just about any song. Miguel, no doubt, shows promise as a versatile artist. That—plus his hopefully loyal fan base—might propel as one of this season's big winners.

Cris Pastor may be the only scholar in the competition who would benefit if the contest lasted a few weeks longer. Parañaque's "The Singing Interior Designer" reached her tipping point late in the competition, when he sang the Jordin Sparks hit "Tattoo." Previously, she had been trying to present herself as a seductive songstress with her sexy rendition of The Beach Boys' "Papa Oom Mow Mow" and The Beatles' "Come Together." But while her Beach Boys cover impressed the judges, Cris' succeeding attempts failed.

In particular, her take on "Come Together" caught the displeasure of resident juror Gerard Salonga. Her following performances were just as uninspiring; even her trio performances with Bunny Malunda and consistent top scholar Liezel Garcia received a lackluster grade of 8.32. But with "Tattoo," Cris was able to prove that she deserves to be part of the final six. While she may be more known for her onscreen dalliance with Hansen Nichols and Iñaki Ting, Cris has a commanding stage presence and never looked awkward even when her vocals faltered. Her succeeding performances after "Tattoo" were surprising, proving that Cris is more effective when she tackles pop songs.

Those doubtful of her skill would argue her most successful performances (besides "Papa Oom Mow Mow") were safe, but they were never boring. As if for penance, Gerard said he was blown away by Cris during the 10th Gala Night, and guest judge Girlie Rodis remarked during the 11th Gala Night that she improved immensely. And while she may be the scholar with the most number of appearance in the bottom four (and the lowest average among the remaining scholars), Cris managed to break the Liezel's streak when she managed to land in the top three—an impressive feat, considering only seven scholars have managed to land in the top three for their solo performance. Cris is nowhere near Liezel Garcia and Laarni Losala in terms of singing ability, but she has proven that she more than vocal prowess on her side.

Van Pojas has already been named as this season's version of Jay-R Siaboc. But to dismiss Van's singing is an underestimation of his talent. He is one of the few scholars who became part of weekly top three, and it helps that he was part of the trio that sang "Yesterday," this season's most successful performance to date. And while Van is not as consistent as Jay Bogayan, he proved early on that he has what it takes to last long in the competition. His rendition of "I Can't Fight This Feeling Anymore" is one of the few that stood out during that 1st Gala Night, and is consistently named by viewers and Internet denizens as one of the more memorable PDA performances to date.

Van's cover of the rock ditty "Tatsulok" may not be as flawless as Bugoy's "I'll Make Love to You" or as risky as Laarni Losala's "Di Ko Kayang Tanggapin," but it nonetheless showed that the show's resident Heartthrob can sing a wide range of songs. While Van was awkward and conscious during his duet with Kitchie Nadal, Cebu's pride might just have what it takes to break the predicted Liezel-Bugoy-Laarni finale.