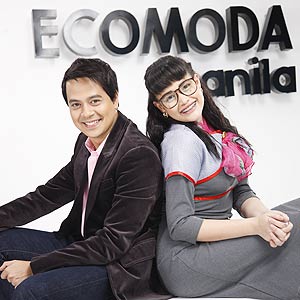 In this series, Bea Alonzo and John Lloyd Cruz, will be seen every night not to provide drama but to make viewers laugh for the first time as Betty and Armando.

Since they are both known as dramatic actors, both of them agreed that starring in this comedy show is a big challenge for them.

John Lloyd, on the other hand, was glad to know that after Maging Sino Ka Man, he will paired with Bea again. He pointed out that the timing is just right since fans have been clamoring for them to appear in another project.

COLUMBIAN VERSION. I Love Betty La Fea will surely bring laughter to the audience as they follow the original story of the Columbian comedy series titled Yo Soy, Betty La Fea (2001).

In fact, according to ABS-CBN business unit head Deo Endrinal, when they bought the rights from the creators of the original Betty La Fea, they were required to create a set that is similar to the Columbian version.

"The entire payment for the rights to Columbia and the office alone cost about P40 million—just to build this [set] and the rights, excluding the production of the show on a weekly basis. Kasi po requirement namin na magtayo ng opisina similar to what they've done all over the world," Deo tells the media.

Betty La Fea has been adapted over than a dozen times already in different countries such as India, Indonesia, Poland, Bulgaria, Romania, Malysia, Hungary, Czech Republic, Italy, Switzerland, Japan, Turkey, Italy, and China. In the United States, there is Ugly Betty, which is also shown locally on Studio 23.

In all of these countries, the Betty La Fea storyline is modified to fit the culture of the country where it will be aired. Erik Salud, who co-directs I Love Betty La Fea with Don Cuaresma, said that they had to change the character of Daniel Valencia, one of the antagonists in the show, to a female character (Daniella Valencia) to be played by Ruffa Gutierrez.

For the other cast members, how were they chosen?

"Most of the cast po really went to a go-see," answers Mr. Endrinal. "We contacted most of our existing managers. We had a two-day go-see wherein most of the stars were asked to portray several roles. Doon po, pinili na namin with the help of Direk Jerry Sineneng kasi at that time, si Direk Jerry ang supposedly magdidirek."

I Love Betty La Fea will also feature the comedic skills of Vhong Navarro, who will play the role of Betty's best friend named Nicolas Mora. He will be joined by veteran comedian Rolando Valdez as Hermes Pengson, the father of Betty; and Philippine Comedy Queen Ai-Ai delas Alas as Julia Pengson, the mother of Betty. Sam Concepcion is cast as Betty's younger brother named Andrew.

Be ready to laugh and be entertained by these people inside the advertising agency, Eco Moda Manila, starting Monday, September 8, on ABS-CBN. I Love Betty La Fea will air right after Iisa Pa Lamang.