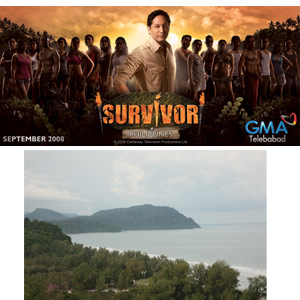 In the GMA-7 reality show Survivor Philippines, 18 castaways will live in a remote island for 39 days. Will the first Pinoy Sole Survivor come from Tribe Jarakay (blue) or from Tribe Naak (red)? Follow their adventures starting September 15, 2008.


Survivor Philippines brings together 18 strangers from all over the country and divides them into two tribes.

For identification, each castaway has to wear a buff, an elastic material with the logo and color of their tribe.

Armed only with one machete for each tribe, the 18 castaways have to live in the island for 39 days. To survive, they need to build their own shelter, scavenge for their own food and protect themselves from nature's elements.

Everyday they will receive a treemail that will provide riddles, clues or instructions about the challenges for the day.

Each challenge is designed to test the castaways' strength, endurance, problem solving skills and teamwork. One day they would be made to stand for hours on a wobbling piece of wood then they'd be tasked to solve a mind-boggling jigsaw puzzle the next. Most of the time, they would have to rely on teamwork to win group challenges that would decide their tribe's fate.

For a castaway, winning means everything.

Winning a reward means getting basic necessities or luxuries that are both rare in the island like getting pillows for a more comfortable sleep or enjoying a full course meal to make up for days without food.

But more than a reward, if there's one thing all castaways would fight for, it's winning immunity. Immunity means having protection from eviction.

Without immunity, one can only hope for the best when it's time for the most nerve-wracking moment in Survivor: the Tribal Council.

This is where each castaway's fate is decided. It doesn't matter if you're the strongest or the smartest in the tribe because it all boils down to two things: the motives and strategies of each castaway.

The tricky part: the last few castaways voted out of the Tribal Council are the ones who will compose the Jury.

When the castaways are down to the final two, it is the Jury that will vote for the winner.

Expect a mixture of action, drama, suspense, romance and comedy as each castaway does anything and everything to claim the P3 million peso grand prize and the distinct honor of being the first ever Pinoy Sole Survivor.