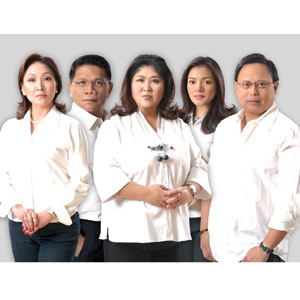 
See former Presidents of the Philippines appear on the same program with the incumbent to talk about how they shaped history. This September, get to know better the Philippines' top newsmakers by watching a TV special to be aired on GMA-7.

After decades of unforgettable news-making spanning five presidencies, GMA News unmasks the untold stories behind major events, stories, and the most influential names that shaped the nation—Ferdinand Marcos, Corazon "Cory" Aquino, Fidel Ramos, Joseph Estrada, and Gloria Macapagal-Arroyo. Taking starkly different paths to power, they all ended up in Malacañang. GMA News reviews its most unforgettable coverage and takes a closer look into the persona of these unique individuals who held the country's fate in their hands.

Before finding themselves in the seat of power, these men and women were ordinary citizens like everyone else. Each was propelled into the spotlight when they rose to power, made headlines and caught their own share of controversies. But beneath the issues, what goes on inside a president's mind? Behind the image-making, what is each President really like? Who is the person behind the position?

Watch as former first lady Imelda Marcos shares stories of what she describes as the country's "golden years." Imelda gives a revealing account of the life of arguably one of the most brilliant, but feared men in politics—Ferdinand Marcos.

The Philippines' and Asia's first female president also appears in her first formal television interview of late. Cory Aquino, the lady in yellow, provides her own take on the struggle for democracy. While serving as mother and wife to her own family, she finds herself the mother of an entire nation.

The list of former presidents goes on. Get to know a side of Fidel Ramos you've never seen before as the General and law-enforcer shows his light side. Newsmakers uncovers the idiosyncrasies behind this military man and backtracks to his time as President.

Actor-turned-politician Joseph Estrada recalls the days he essayed his most important role. Erap's stories reveal a life made for the movies, with winning lines and unforgettable scenes caught on camera. The theme of hero and villain, friend or foe is a constant in his political career.

Newsmakers also goes current with a rare sit-down interview with President Gloria Macapagal-Arroyo herself. The current resident of Malacañang shares her thoughts on finding herself back into the Palace—where she once lived as a child.

GMA News has served to uncover truths behind each of the administrations of five leaders in our nation's history. But with each report comes a back story. Witness a major presentation that will reveal never-before-seen footages and little-known facts about the most powerful people in recent Philippine history.