Melanie Marquez is the first to leave "Celebrity Duets 2" 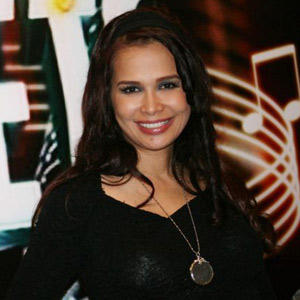 Former beauty queen Melanie Marquez (in photo) was ranked in the bottom four with beauty queen Carlene Aguilar, actor Joey Marquez (and Melanie's brother), and designer JC Buendia. In the end, it was Melanie who was the first contestant to be eliminated from GMA-7's Celebrity Duets 2.


It seems that the contestants are feeling the heat and pressure of the competition as the first round of eliminations took place last Saturday, September 6, on Celebrity Duets 2. First to exit was model and actress Melanie Marquez who got the boot after receiving the lowest number of votes from a nationwide audience.

Before completely leaving the show, Melanie performed her version of Madonna's "Vogue"—the song that she chose and rehearsed prior to her elimination. The Queen of Soul Jaya joined her on-stage.

After the eliminations, it was once again time for the singing showdown. Last week saw the unfolding of a new line-up of singing superstars, each complementing the style and song choice of the celebrity contenders.

First on the concert stage was wellness guru Cory Quirino who had comedienne Nanette Inventor as her partner. Cory moved and grooved to Olivia Newton-John's ‘80s hit, "Physical," wearing a pink-and-green aerobics outfit. Nanette danced with her on-stage, but in a similarly styled blue-and-yellow costume.

After the performance, the three celebrity judges then offered their comments.

As for Celebrity Duets Season 1 winner Tessa Prieto-Valdes: "I'm always positive!" she exclaimed "Ang cute ng combination ninyo and everything. Of course, you know me...I'm always into cinematography [so] I love the combination. I like the outfit! I'm happy that you're still in," she told Cory.

Next was designer JC Buendia who opted for a rock jig this time around. Together with rock icon, Jett Pangan of The Dawn, JC sang U2's "Pride (In The Name of Love)". And like in most of his performances, JC designed his own costume for this number.

Tessa, however, was more generous in giving praises. "This is a much better song than last week. Rock and roll, man! JC to the end! I love it!" she exclaimed.

"That was so hot," said Direk Freddie, referring to the girls' sexy midriff-showing outfits. "And yes, I wish my girlfriends were both of you. This is by the fact na halos walang tono yung verse. Wala akong naintindihang tono. Pero nung pumasok yung chorus, sige, swak na." he remarked.

"So far, you beat already last year's beauty pageant [contestant]!" cried Tessa, comparing Carlene to Bb. Pilipinas Universe Anna Teresa Licaros, who was the first to exit in season one. "All the way ka na!" she exclaimed. "Baka this year, it's gonna be a beauty pageant winner! Wonderful!"

Next up was comedian Joey Marquez, who sang with long-time friend Keempee de Leon. For their duet, they sang the OPM novelty song, "Bikining Itim."

Freddie, however, opted for a short but extraordinarily sweet comment. "Tsong...Cheriffic!" he told Joey, who is nicknamed Tsong in the showbiz industry.

Next to last was chef JL Cang who performed APO Hiking Society's classic song, "Prinsesa" with singer Wency Cornejo. Like most contestants in the show, JL wore something that matched what his partner wore-a pair of sunglasses.

But Direk Freddie was bent on giving a negative feedback. "Kaso hindi ito Celebrity Confi-duets," he told his fellow judge.

Last to perform was soccer heartthrob Phil Younghusband who went for the romantic song track last week. He chose Ariel Rivera's OPM classic, "Getting To Know Each Other" which he sang with SOP mainstay Maricris Garcia.

As though romantic stares at Marciris weren't enough, Phil also gave Tessa a bouquet of roses for the judge's birthday.

The Sea Princess was obviously thrilled. "Okay, I was gonna say something, you know...but oh my gosh, Phil, thank you so much! I'll see you in the finals."

"She liked your performance, that's what it meant," said Ogie, as he jokingly translated Tessa's comment for Phil.

"Phil, both you and JL are the heartthrobs in the competition," observed Danny Tan. "[But] the difference between the two of you-you are debonair, dashing, and you emote well. You have a better performance tonight. And you are interacting with your ka-duet. Very good."

"It was like a movie," Direk Freddie observed. "Para siyang sine...you know, perfect faces, perfect bodies, perfect fit...and like most movies," he paused, "maybe it should've been dubbed," said the director. But despite the negative comment, Phil simply flashed a smile.

Next week, another round of celebrity eliminations will take over the concert stage. Who gets to leave and who gets to stay? Find out next week on Celebrity Duets 2, Saturdays on GMA-7 after Pinoy Records.