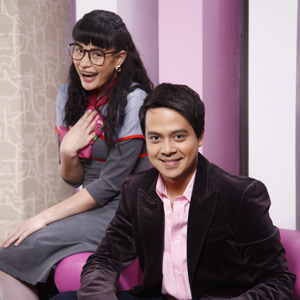 
After spending eight years as a love team, Bea Alonzo and John Lloyd Cruz mark another milestone in their careers by portraying the Philippine version of a popular TV series about a woman who might be ugly physically but has a beautiful personality.

Since Bea is known for tearjerking soap operas such as Maging Sino Ka Man, is she already comfortable doing comedy?

Doesn't she feel awkward shooting scenes such as hitting a street lamp and banging her face against a glass door?

They will be joined by veteran and respected TV personalities such as Rolando Valdez as Hermes Pengson, Betty's loving and supportive dad and a former OFW. His wife and Betty's adoring mother is Julia Pengson, played by the Philippines' Concert Comedy Queen Ai-Ai delas Alas. Singer-teen actor Sam Concepcion plays the role of Andrew, Betty's younger brother who wants to break into showbiz.

The Betty-ful star won't be seen without her best friend Nicolas Mora portrayed by funny man Vhong Navarro. Nicolas is Betty's male version and look-alike! But the difference between him and Betty is that he has a liking for beautiful women and believes that wealth is the solution to his dreams.


Eco Moda Manila is the advertising agency where Betty dreams of working. This is where she will meet the office's beautiful but wicked secretaries and big bosses.


Number one on the list is the gorgeous and ambitious ex-model Daniella Valencia played by former beauty queen and TV host-actress Ruffa Gutierrez. This role is definitely made for Ruffa because she is a natural as she everything to get the career that she wants. But underneath her hard and serious disposition is a certain weakness.


Marcela Valencia, played by Megan Young, is Daniella's younger sister and the woman who is very much in love with Armando.

The other secretaries of Eco Moda Manila are Patricia Suarez, Betty's rival secretary played by Wendy Valdez. Unlike Betty, Patricia landed the job as secretary only because she is beautiful. Daniella's secretary is Maria Rose Sanchez, played by Meryll Soriano.Rose is the kind-hearted girl who is dedicated to her family and is clueless about her cheating husband. She will eventually be Betty's best female friend. There is also Kylie Torres, Mario's secretary played by singer Sheryn Regis.


But that's not the end of the I Love Betty la Fea cast. Other than big boss Armando, there are also the other bosses (and feeling bosess) of Eco Moda Manila. There's the playboy Mario Collantes, Armando's arrogant friend, played by Joem Bascon. Hugo Bossini, the creative director of Eco Moda Manila, will be portrayed by Thou Reyes. Joining them are Ronnie Liang as Enrique Robles, the agency's Human Resources Manager, and Jojo Alejar as Mac Ularte, the finance officer who is obsessed with Daniella.

Under the direction of Erick Salud and Don Cuaresma, I Love Betty La Fea will air its pilot episode tonight, September 8, right after ABS-CBN's teleserye Dyosa.