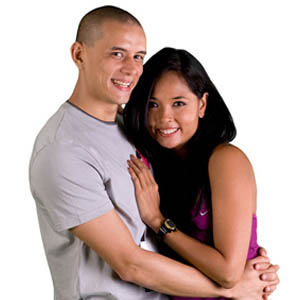 "Explosive! It's just that hindi maiiwasan na minsan mag-aaway kayo. You're under high stress and situations, and we're both so competitive against other people. We are also competitive between the two of us," says Tisha Silang when asked about her partnership with boyfriend Geoff Rodriguez on The Amazing Race Asia 3.

After the third-place finish of buddies Marc Nelson and Rovilson Fernandez in the second season of The Amazing Race Asia, the Philippines will be represented in the third season by dating couple Tisha Silang and Geoff Rodriguez.

The two are actually familiar faces in local showbiz. Tisha was crowned Bb. Pilipinas-Universe in 1998 but resigned because of her Canadian citizenship. Geoff, on the other hand, was a member of the all-male group Powerboys—along with Jordan Herrera, Frank Garcia, Greg Martin, and Jay Salas—who became famous after appearing in a deodorant commercial.

PEP (Philippine Entertainment Portal) had the opportunity to talk to Tisha at the launch of The Amazing Race Asia 3 (TARA 3) sponsored by Caltex last night, September 4, at Fiamma Bar & Resto on Jupiter St., Makati City. Those invited had the privilege to watch the first episode—minus the ending—that will be aired on September 11 in AXN.

Tisha, who just arrived from Toronto, Canada early morning on the same day, actually cannot divulge too much information about their participation and experience because of confidentiality clause.

"[You will be] sued for five million dollars," warns Tisha if she says too much. "You're not allowed to divulge talaga. I mean, it would ruin it, because the reason why the people watch it is because they wanna see what happened. And like, even us, the contestants, for what we went through, we want everybody to also have the enjoyment of knowing, wondering who got eliminated."

What are the details they can't talk about?

"Particular things about the show. Anything that hasn't aired yet, hindi puwede. But we were gone for one month, and it's really the toughest race ever. For me ha, I've watched a lot of episodes, pero siguro it's different when you're the one actually doing it. But it caused a lot of tears, a lot of stress, and it's not easy at all," said Tisha cautiously.

Although she can't reveal the places and countries they went to, Tisha said that the race ended last June.

PARTNERSHIP WITH GEOFF. Tisha and Geoff have been dating for four years now. But how was their partnership throughout the race?

"Explosive!" Tisha says with a laugh. "It's just that hindi maiiwasan na minsan mag-aaway kayo. You're under high stress and situations, and we're both so competitive against other people. We are also competitive between the two of us. Siyempre, there are instances... ‘Tsaka kami lang yung couple in a relationship, everybody else is like sister-brother, friends...kami lang yung dating. So when you're dating, it's different."

Was there a point when she wanted to break up with him?

"Oo! I'm sure...I don't know!" she laughs. "There are times that you're like, 'Ay, ayoko na sa ‘yo, ‘no!' But I mean, it's the situation that you're in. Siguro we won't be as bad as the last fierce couple that was fighting, Henry and Terri [Reed, also from the Philippines]."

Who had more temper, she or Geoff?

"Si Geoff, I'm sure!" she says quickly. "Probably because he's more competitive than I am. Plus, he's best friend with Marc and Rovilson, so siyempre gusto niya, ‘We're just as good as you guys.' But it helps, it helps me to push also.

What were the things that she discovered while they were in the race?

"That there are things that I can do that I would have never imagined that I'd ever do," replies Tisha. "And you will see that later. Yung mga napapanood mo sa TV, you're like, ‘There's no way I'd do that.' Pero ‘pag nandun ka na, gagawin mo, e. Kasi you see everybody else doing it, parang you'll think, ‘Why can't I do it if they're doing it?' I can do it, so..."

Why did she join Amazing Race Asia?

"Well, I was a fan of the show before... But I wanted to join the one in the States, pero kailangan U.S. citizen ka to join. So when they came up with the one in Asia, we sent an audition tape pero for last season. Pero hindi kami natanggap last year.

"Sila Marc and Rovilson yung last year, who happen to be our friends also. So, parang last year we were watching with them. And then when it stopped airing, we were like, ‘Ano nang gagawin natin ng Thursday? Wala na tayong gagawin.' So we sent in another audition tape for this year," relates the Fil-Canadian beauty queen.

BIG SHOES TO FILL. Tisha and Geoff have some big shoes to fill since Marc and Rovilson lasted until the final episode and ended up third last season. Is there any pressure on their part?

"Yeah, that was a big pressure kasi we know that there's so many fans in the Philippines ng Amazing Race. So parang, you don't wanna be out first. You wanna do well so the Filipinos has something to watch for a long time. Plus the fact that Marc and Rovilson did so well, it made us want to at least sana do as well as them. But you know, there are different dynamics. They're two guys, that's an advantage also sometimes. So, we'll see if we match up to them."

Did they get any tips from Marc and Rovilson?

"You know, they can give maybe little tips, like make sure you read things carefully. But they can't really do anything because they don't know what you're gonna be doing. Everything's different, so kahit na ano'ng sabihin nila, it wouldn't help," says Tisha.

THE OTHER TEAMS. What can the Filipinos expect from TARA 3?

"What I find different this season... Last season everybody was, you know, very nice to each other. This one, everyone's cutthroat, there's a lot of characters. The teams who have seen the race already, they said it's hilarious. So I think we have a lot of funny characters also on this one. It's gonna be more exciting to watch.

"Nothing can prepare you for it. You can be the most athletic person and it wouldn't help. It's like a mix of a little bit of athleticism, a lot of strategy, and a lot of patience and luck."

Aside from Tisha, there are two other beauty queens this season—Miss Universe 2005 Natalie Glebova and best friend Miss Thailand Universe 2006 first runner-up Pailin Rungratanasunthorn, who represented Thailand in Miss Earth 2006. Although Natalie is Russian-Canadian—she represented Canada in the Miss Universe—she will represent Thailand along with Pailin in TARA 3.

Tisha has this explanation about Natalie's case: "She's based in Thailand now. She's married to one of the top tennis players [Paradorn Srichapan] in Thailand. So she joined with another Thai beauty queen, so they're team is the beauty queens."

Did the make any friends with the other teams?

"We were more focused on the competition," answers Tisha. "We did make friends, like we still talk to them now and there's always plans to try to meet up with everybody again. Especially before nag-air yung race, parang they're the only ones you can talk to about it because you can't share your experience with anybody else. So it's just them. So, you know, sa mga Facebook, nag-uusap kami. We always keep in touch, it's something that will always keep us in touch with each other."

Aside from the Philippines and Thailand, the other teams this season consist of pairs from Hong Kong, India, Malaysia, South Korea, and Singapore.

AMAZING RACE VS. SURVIVOR. Interestingly, the airing of Amazing Race Asia 3 will coincide with the start of GMA-7's Survivor Philippines, hosted by Paolo Bediones. In case you don't know, Paolo became Tisha's boyfriend after she won in Binibining Pilipinas, where they first met.

"Ewan ko, wala akong alam. But yeah, I heard about that," says Tisha when asked about her reaction to the "competition."

What can he say about Paolo?

"I'm happy for him, he's got that show now. I haven't spoken to Paolo since he probably interviewed me that time I was about to get married. That was like 2003," says Tisha, who was once married to a non-showbiz guy but they separated afterwards.

"Ayoko ng Survivor, it's worse, like the things that they have to go through," she replies with a smile.