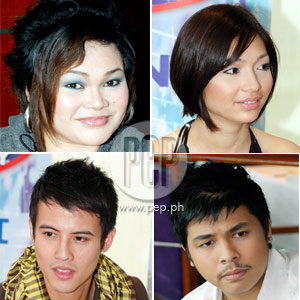 (From upper left frame, clockwise) Poy Palma, Bunny Malunda, Iñaki Ting, and Sen Nichols might not have made it to the Final Six of Pinoy Dream Academy Season 2 but they say that is not a hindrance for them to reach their dreams of penetrating the music industry.


Former Pinoy Dream Academy Season 2 scholars Bunny Malunda, Iñaki Ting, and Sen Nichols, together with Honorary Scholar Poy Palma may all have missed making it to the Final Six but just the same, they are all keen on going to wherever their love for music takes them.


Bunny, Iñaki and Sen couldn't be any more different in the eyes of the viewing public.

Bunny is a loving wife and mother determined to reach her dreams despite her limitations. While inside the Academy, she was diagnosed to have a cyst in her throat that greatly affected her singing. Prior to that, she also had to deal with the forced expulsion that was given to her husband, Chivas, because of his episodic collapses. Hard as it may have been for Bunny, she never gave up the fight until the night she was expelled.

THE TEACHER'S WIFE. Now that she is already outside of the academy, Bunny is more than ready to make things happen to herself. She recently had her cyst removed and is now undergoing therapy to restore the singing capabilities that were momentarily marred by it. In just a couple more weeks, Bunny will be eating be belting out songs as if she never had a cyst.


How is life after PDA? "Very good. I was able to make up for the months that I was not with my family and I'm very happy with how things are at the moment," she said with a smile.


How does it feel that she now has a lot of supporters?


"It is very surreal for me because I never expected people to root for me considering that I had problems singing," Bunny tearfully replied. She gets emotional when it comes to talking about her supporters because she's really overwhelmed by their faith in her. In fact, she almost cried during her guesting on Uberture wherein Billy Crawford asked her to read fan mail. She didn't get to finish the letter because she was on the verge of tears. Billy took over and finished reading the letter for her.


What is her message to all the people who supported her and believed in her talent?

"I really want to thank them and I hope that they continue supporting me outside the Academy. I'm really doing everything that I can to make them happy and hopefully, the removal of my cyst would be the start of better performances dedicated to them," she humbly said.


THE STAGE PERFORMER. Iñaki has been interpreted by viewers in different ways. Some think that he's an arrogant rich kid while others think he's strong-willed young man who knows what he wants in life. While it is true that Iñaki is from a well-off family, he is not spoiled as some would claim. Even though he is a nephew of Juan Miguel Salvador (a known singer who became popular during the 1980s), he has always preferred to make it on his own merits as a singer.


"I hope that the people would give me another chance to prove that contrary to what some think, I am actually a good person," said Iñaki.

Is there anything he regrets doing or not doing inside the Academy? "I regret the things I did that have offended anyone or hurt their feelings in any way," he genuinely replied.


What are his plans after PDA?

"I want to pursue my singing career. Maybe come up with an album or venture into composing. I want to work with my friends like Christian Bautista and Sam Concepcion and, of course, my idol Gary Valenciano," said the Stage Performer.

THE CANCER SURVIVOR. Sen was baptized by Media Performance Mentor Joey Reyes as "The Saint" because of his good qualities. Viewers couldn't agree more as the Cancer Survivor won them over with his good looks, charm, and kindness. A lot of people admire Sen for being a good friend who's always more than willing to lend a hand and for being a good student who always perseveres to improve himself.


The perseverance and drive that the people see in Hansen are products of his ordeal with cancer. Right after he was able to surpass the fatal ailment, he was told that he would never sing again but Sen begged to differ. The US-grown Fil-Am went to the Philippines to find a career out of the thing he loves the most-singing. He auditioned to be a Scholar during the first season of PDA but unfortunately, he didn't make the final cut. When the Academy's door opened for a new batch of Scholars, Sen tried his luck once more.

What made him audition again?

"I have always been a fighter. I was inflicted with cancer and I fought it. I came home to the Philippines to fulfill my dreams and there's no way a rejection is going to hold me back. I didn't make it before but it doesn't mean that I can't make it the second time around," he said.


Was he aware of the risk he was taking? "Very much, actually. I knew I was risking getting another rejection but I still did it anyway. My efforts paid off and I was able to get in this time," Sen pointed out.


Was he disappointed when he was expelled?

"Of course I was disappointed. I was really close to getting in to the Top 6 but I got voted out. Nonetheless, I don't believe that getting expelled makes me less of a performer. What I believe is that my getting expelled is just a start of good things to come. As long as I continue working hard, I know that I'll be able to achieve my dreams" he concluded.

THE OBEDIENT DAUGHTER. Among the four, Poy is the only one who was not able to snag a spot in the season's Top 16. She was one of the four wildcards who vied for the chance to get into the Academy. Unfortunately, she failed to get the text votes needed for her to become an official Scholar.

To her and her fan's delight, she was given the opportunity to enter the Academy as an Honorary Scholar tasked to clinch the Star Scholar title thrice. Each Star Scholar award was equivalent to a prize money of P50,000 and had she fulfilled her assignment as an regular Honorary Scholar, she could've decided whether to take home P150,000 or carry on as a regular Scholar and battle it out with the rset for this season's Grand Star Dreamer title. As consistent as she was in making it to the Top 3 each week, Poy wasn't able to get the Star Scholar award.


Was she disappointed when she failed to carry out her assignment?

"No, because in my opinion, I was able to fulfill my job as an Honorary Scholar. In my four-week stay, I consistently made it to the Top 3 and that's worth everything for me," she said. She also added that she is really happy that her she was able to help bring out the best in the other Scholars as her presence made them work harder.


What does she plan to do after her stint on PDA?

"Strike while the iron is hot! I will surely grab any opportunity that comes my way," she said, beaming.


Who does she want to win this season? "In terms of vocal ability, I think it's a toss between Laarni [Losala] and Bugoy [Bogayan]," she replied.


As different as Bunny, Iñaki, Sen and Poy are perceived by people, one thing's for sure: they all have made impressions that will never be easily forgotten. They are four individuals who dared to fulfill their dreams inside the Academy. Even though they didn't clinch spots in this season's Top 6, they have successfully endeared themselves to the viewers who are eagerly waiting for the next step that they are going to make.

Find out the fate of the Final Six as the two-part finale of Pinoy Dream Academy Season 2 takes place this weekend. Watch Bugoy Bogayan, Cris Pastor, Laarni Losala, Liezel Garcia, Miguel Mendoza, and Van Pojas compete in the Cuneta Astrodome in Pasay City on September 13 and 14, 2008.