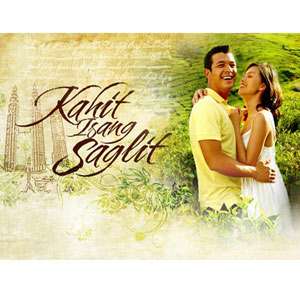 "This will be a collaboration of two countries, of ABS-CBN and Double Vision (Malaysia). And if this is successful, it will open a lot of opportunities for the two countries and will pave the way for more projects of this kind," said Direk Gilbert "Manong" Perez about Kahit Isang Saglit in a previous interview with ABS-CBN Interactive before he passed away.


Witness the teamwork of Filipino and Malaysian actors in the movie-like teleserye Kahit Isang Saglit starting this Monday, September 15, on ABS-CBN Primetime Bida.

With actors that come from two different countries, Direk Jerry Sineneng said that it wasn't that hard to direct them together.

"In terms of directing, napakadali naman kasi napakahusay nila. I'm so blessed, Manong [Gilbert Perez] was so blessed to be given a set of really, really good actors. Pagdating sa taping, they're all committed, they're all professional," relates Direk Jerry, who replaced Kahit Isang Saglit's original director, the late Direk Gilbert "Manong" Perez.

Direk Gilbert handled the first few episodes of Kahit Isang Saglit. Unfortunately, he was not able to finish the series when he died of a heart attack last July.

"Surprisingly, on our first day, ramdam na ramdam ko na rin 'yong acceptance sa akin ni Carmen. I told her, ‘We need each other's help, ha? Hindi ako 'yong utos lang nang utos, I need your help, too.' And she gave it to me right away naman, the trust, the rapport."

In line with this, Direk Jerry assures that what will come out in Kahit Isang Saglit will most likely represent what would Direk Gilbert do if he's the one directing it.

Kahit Isang Saglit will highlight the lives of Rocky (Jericho Rosales) and Garie (Carmen Soo) who will cross paths in Malaysia as they pursue different things in life. Rocky, a member of a drug enforcement group, is in search of the man who killed his father; while Malaysian-born Garie hopes to meet her long-lost Filipino father (to be played by Albert Martinez).

Follow the fate of Rocky and Garie in Kahit Isang Saglit starting this Monday, September 15, on ABS-CBN's Primetime Bida.