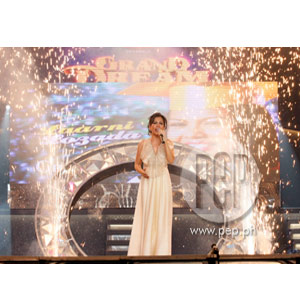 The Pride of Sultan Kudarat Laarni Lozada (whose real last name is Losala) is the Grand Star Dreamer of Pinoy Dream Academy Season 2. She was awarded her prizes last night, September 14, at the Cuneta Astrodome in Pasay City.

She was one of the more notorious scholars in the competition, gaining attention due to her mood swings and conflicts with other scholars than for her singing. She was also given one of the lowest scores during the first Gala performance night. But Suldan Kudarat's pride Laarni Lozada beat the odds after she named Grand Star Dreamer during the Pinoy Dream Academy Season 2 Awards Night last night, September 14, at the Cuneta Astrodome in Pasay City.


Laarni got a total of 651,696 votes, or 35.21 percent of the total text votes. The result was somewhat expected, after her landslide win over Miguel Mendoza and Apple Abarquez during the 8th Gala Night. And her victory also made Headmaster Ryan Cayabyab's final comment on Laarni's performance last Saturday seem prophetic. "Manalig ka. Malapit na," he said, quoting Laarni's piece, "Manalig Ka."

Laarni was very emotional during her final performance, where she cried the practically the entirety of her song—a fitting end to Laarni's journey as a PDA scholar. She won one million pesos from ABS-CBN, a 1.5 million business package from Crystal Clear, and a house and lot from Globe Asiatique.


Miguel Mendoza's come-from-behind victory as the third Star Dreamer, on the other hand, was the one of the night's biggest surprises. It also further established Miguel as this season's Ronnie Liang counterpart—both were past reality singing show contestants, both were tagged as balladeers, and both won against the show's fourth placer with only a few thousand text votes. Miguel, getting 253,412 votes or 13.69 percent of the text votes, was hardly a critical favorite by jurors, but the third place finish proves he is a favorite among viewers.


Meanwhile, Liezel Garcia and Van Roxas failed to clinch top spots despite being touted as two of the stronger singers in the competition. Liezel's stellar performance throughout the competition, for one, getting help her get text votes. With 247,346 votes (13.36 percent), Liezel suffered the fate PDA season 1 scholar Panky Trinidad experienced, since both were consistent top scorers during the weekly performances. Van's fifth place finish (112,065 votes, or 6.06 percent of the total votes) was also as surprising. Cris Pastor's last place finish (1.97 percent, or merely 36,487 votes) was expected, but she seemed content with the results. "Ito na po yung simula ng lahat," she said.


All in all, more than 1.8 million votes were cast in a span of more than two weeks. The total votes were more than a million lower than last season's total finals text votes, with season one winner Yeng Constantino getting 697,648 votes. But while the votes garnered by Laarni and Yeng were only slightly different, the season one top three got more text votes all in all, with 1st runner-up Jay-R Siaboc getting 612,767 votes and 2nd placer Ronnie Liang getting 558,912 votes. The drastic difference may have something to do with exposure—even before the end of the competition, PDA season 1 contestants were already churning radio hits, most notably Yeng's "Hawak Kamay," which became a huge hit in 2006 even before she was declared Grand Star Dreamer. It was also named Best Theme Song in the 32nd Metro Manila Film Festival, only weeks after the competition concluded. The season one scholars also had a number of albums with their original songs reaching the Top 20 of record bars even before their Headmaster's List of Ten was named.


And now it's up to the PDA Season 2 scholars to show that their as good as their predecessors—or, hopefully, better—since not a few have commented how the first season contestants were more talented (the only problem of the first season, many say, is Yeng's predictable win, perhaps due to her radio hit). They will also have to dispel the notion that local reality talent shows (such as Star Circle Quest and Star in a Million; also Pinoy Big Brother, considering a number of its alumni have ventured into showbiz) have a "sophomore curse," since very few products of reality show second seasons have made it big in the industry. But Laarni's impressive win, dispelling these notions is definitely possible.