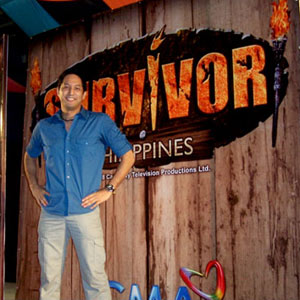 Paolo Bediones reveals that he lost around 10-12 pounds while shooting Survivor Philippines in Thailand. This reality show will air tonight, September 15, on GMA-7 right after Ako si Kim Samsoon.


Around 35,000 to 40,000 people auditioned for GMA-7's Survivor Philippines but only 18 Filipinos were lucky enough to be included as castaways. Watch their struggles in Koh Tarutao island, Thailand starting tonight, September 15.


The show will run for three months and the castaways have all returned to the Philippines but the winner has yet to be decided in a live "tribal council" that will also serve as the reunion of all the contenders.

Along with the 18 castaways, Survivor Philippines host Paolo Bediones joined over 120 production staff in shooting the first season of this reality show. Two tribes will compete, namely Naak and Jarakay, which translates to snake and crocodile, respectively, in the Thai language.

The castaways are composed of:

BARE ESSENTIALS. Paolo Bediones narrates that the castaways were allowed to bring only the following personal items: pair of shoes, one piece of underwear, a swimwear, and a top. "That was all they had for 39 days. No shampoo, no toothbrush, no deodrant, no toiletries. For some of them, that was unheard of. Ang bathroom mo, shovel na ganyan kaliit [indicates size]. Kanya-kanyang hukay 'yan sa campsite."

CHOOSING THE CASTAWAYS. The moreno host describes the screening process that all the castaways went through before they could join this TV series. "There are technically 5 stages and each of them have to prove and go beyond just the looks, beyond their overall appearance. Personality matters...marami dyan kinuha because we knew that there's certain personality na pwede nila ipakita and consistent dapat yun.

BATTLE OF THE SEXES? Since the Survivor franchise usually involves physical challenges, does it mean that the men have an inherent advantage over the women? Paolo defended the show by saying, "Nope, you'll be surprised. Challenges are designed such that whatever gender, ikaw ang pwede manalo. Ang daming mga considerations, especially in making a challenge, that's why importante na meron kang tinatawag na dream teamers, people who try out the challenge, kasama na rin ako dun."

He also reminded the press about the tagline of the show. "Kaya nga pautakan, pagalingan, patatagan, di ba? [The English version would be Outwit, Outplay, Outlast]

"Outwitting is not just during the tribal council, or during the voting out. It is also during the game, paano ka didiskarte pag nakita mu yung challenge, inexplain ko sa ‘yo once, naintindihan mo ba agad, you remember the rules, kasi any violation, pwede kita tanggalin sa laro, di ba or out of the challenge, disqualified, you have to be alert, kahit gutom ka, wala kang tulog, bumagyo nung gabi."

Paolo adds that his stunt for the opening sequence of the show involves a helicopter and they had to shoot it for only two hours since the rental of the chopper is every expensive. He also describes the campsite of the two tribes as having snakes, scorpions, and monkeys.