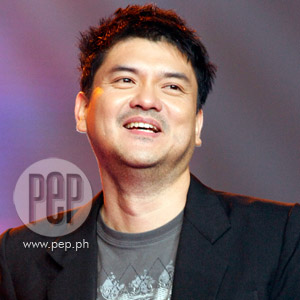 Teacher Monet Silvestre (in photo) talked exclusively to PEP regarding the scholars of Pinoy Dream Academy Season 2. He narrates how he helped Grand Star Dreamer Laarni Lozada improve herself by lending her some self-help books.


Just like the Final Six of Pinoy Dream Academy Season 2, voice mentor Monet Silvestre had just come out of the Academy where he had been staying for the past three months since June 14, 2008. Last Sunday, September 14, the "live-in" mentor of the scholars was able to return to the outside world and be reunited with his loved ones.

During the Grand Dream Night of PDA Season 2, PEP (Philippine Entertainment Portal) was able to talk with Teacher Monet regarding his observations of the second batch of PDA scholars.

The widely watched show ended last Sunday, September 14, with Laarni Lozada bagging the much coveted title of Grand Star Dreamer. She was followed by Jay "Bugoy" Drilon and Miguel Mendoza. Landing in the fourth to sixth places were Liezel Garcia, Van Roxas, and Cris Pastor, respectively.

They all stressed vocal training, the ethics of performing, and most importantly, how to last and have a steadfast career in the music industry. Does he agree with the result of the voting of viewers for PDA Season 2?

"Yes, you know in the end it's their [audience] judgment di ba? I'm happy with the Top Six, whoever they are, it is the one you will last, the one you will last. And I hope whatever the Academy has instilled in them, I hope that's it: you should last. And we should, we teach them how to do it, how to last in this industry," said Teacher Monet.

He enjoyed working and living with the scholars inside the Academy as he honed the vocal skills and people skills of those under his wing. "As hard as it was, physically, mentally, and psychologically, it was so much fun. If anything...if anything is fun, wala eh, okay lang. Ano ba naman yong trabahong walang hirap di ba at pasakit? As long as you have fun doing it, okay lang, e. Kaya when it ended, medyo sad din ako kasi this is the best gig of my life."

He cleared there was no favoritism inside the academy. Everyone was treated equally because each and everyone have their own unique traits and eccentric habits.

Did he have an idea who would win during the Grand Dream Night? "Even if I knew at a certain point, for 13 weeks towards the gala night, I intentionally made it a point to treat them equally. To treat them equally, as individuals also. You have to adjust on a case-to-case basis. But you know any family, really, we treat them as you know because we love them as a member."

The first PDA Grand Star Dreamer Yeng Constantino was propelled to fame by her original composition, "Hawak Kamay." Does he think that Laarni can reach or even surpass the popularity of Yeng?

"That's completely up to her. As long as she gives what her fans demand of her, as long as she tries to please her fans, as long as she is an easy person to work with, and she does everything to hone her craft and not forget what God gave her, then she will last," predicted Teacher Monet.

It will be remembered that during the first part of the show, Laarni earned negative criticisms from the other scholars for her mood swings and so-called attitude problem. Even Teacher Monet admitted that she could get on his nerves sometimes. "You know, Laarni would irritate me on how she would react to situations. I would admit and nakita naman yun. But you know, if I turned a blind eye to her and just ignored her that would be the worst thing I could do as a live-in mentor. I have to address each and every problem.


"I've lent them books and Laarni voraciously read them. I'm a self-help book addict so lahat ng mga libro ko nand'yan sa Academy hanggang ngayon. All the self-help books were on Laarni's bed and I saw her grow-her personal growth inside so I'm glad," he observed.


R&B singer Liezel Garcia placed fourth among the Final Six, even though she has been voted Star Scholar for five times during the competition. Teacher Monet explained to PEP that he wasn't surprised that Liezel didn't win as Grand Star Dreamer. "Because honestly it depends on the demographics. I don't know but the fan base of Liezel was not able to garner enough resources to get her to the top three. Ganoon, e, it's that simple. Even with her talent, ganoon ‘yong game."

He pointed out that it wasn't merely the scholar's talent counted in the competition but the number of fans supporting the singer.


Last Sunday at the Cuneta Astrodome, before the hosts announced who would be the fourth placer in the competition, the audience started shouting the name of Miguel Mendoza. However, The Romantic Crooner actually landed in the Top Three and won as the Third Star Dreamer. Does he agree with this ranking?

He added: "I hope there's another season. I'm glad to be a mentor, a small part of their journey. I am happy to have played that small part."