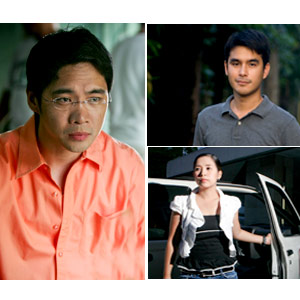 The hosts of Kalye: Mga Kuwento ng Lansangan are (from left, clockwise) Anthony Taberna, Atom Araullo, and Sol Aragones. Their late-night show will air its pilot episode tonight, September 22, right after ABS-CBN's Bandila.
In the midst of the current national issues that Filipinos face everyday, there are stories often neglected but need utmost attention because they have a direct impact on ordinary citizens.

Kalye is a current affairs magazine show that features three stories that the reporters can find in the streets every week. It intends to dissect what is happening in the streets, put them into context what our society has become, and compel viewers to action.

It will tackle not-so-ordinary street stories, underground activities, or stories that come out at night. There will be a wide range of stories like demolition of shanties, cutting down of trees, vehicular accidents, or babies thrown in garbage cans.

"There are stories that do not make the headlines, but are equally important and in fact, they are nearer to the heart of ordinary citizens," said Taberna, who received the Benigno S. Aquino Jr. Fellowship for Professional Development for Journalism given by the Embassy of the United States of America this year.

Notably, Kalye is anchored by three young and active journalists who are used to covering crime stories and general news assignments.

Taberna, who started as a radio reporter before crossing over to TV as anchor-commentator in Umagang Kayganda, said they represent the voice of the youth and would like to make young Filipinos more critically aware of issues that matter to society and their lives.

Araullo, who started as a morning show host on Studio 23, has been patrolling the city to report about police stories in TV Patrol World and Umagang Kayganda to give viewers important information that will arm them against crime.

Aragones added the show will not only present action-packed footage shocking street footage that will keep viewers on the edge of their seats, but also include short segments or bumpers about survival techniques in the urban jungle.