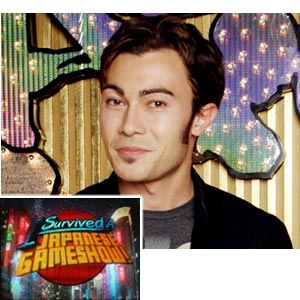 Studio 23's latest offering, I Survived a Japanese Game Show, hosted by Tony Sano (in photo) combines the element of a game show with reality program. The show gathers ten unsuspecting Americans who are all sent to Japan to complete the challenges and at the same time introduce them to a culture totally different from theirs.


I Survived a Japanese Game Show, now being shown on Studio 23 every Sunday at 7 PM, follows ten Americans who are whisked away to Japan to compete in the ultimate Japanese style game show to win US$250,000.

Guided by host/interpreter Tony Sano, contestants must go through out-of-this-world challenges and weird obstacles like catching and eating the mochi balls placed on helmets of fellow contestants who were running on the treadmill.


Most of us Filipinos would perhaps immediately think of Takeshi's Castle as our first major introduction to Japanese produced game shows.


The American-Japanese host, however, elaborated that I Survived a Japanese Game Show is very unique as compared to the others we've seen in the past and in recent years. To kick things off, the contestants tapped to participate are not Japanese natives but rather ten Americans who are completely naïve about Japan and its culture.


"I'm not actually part of the selection process," the amiable host quickly clarified. "All I know is that prior to the competition, all ten had never been to Japan and they were also not informed right away. So it was a surprise when they were informed that they're heading to Japan."


Being in a totally unknown territory while at the same time having to compete for a chance to take home $250,000 is what gives the game show that exciting twist according to Tony.


The challenges, said Tony, "are not easy" but they're not Fear Factor-like challenges either. Japanese game shows are known to be more physical but delivered in a fun, almost childish, approach.


"But again, it's not easy and it can get really crazy," warned Tony, who described the show as brimming with "treadmills, Velcro suits and trampolines." There are also street challenges like the contestants being set free in Tokyo to chat with strangers.


Other than the demanding physical challenges, the contestants are all stationed in one house ala-Big Brother throughout their stay in the show. There are challenges still even inside the house as the contestants are strictly ordered to adhere to Japanese tradition under the guidance of resident Mama-san named Kozue Saito.


It was more than just winning the cash prize, Tony rationalized, as contestants will do anything to pass the tests so as to prolong their stay in Japan. Beyond the usual elements of a game show and a reality program, I Survived a Japanese Game Show exposes viewers on that scenario of discovering and accepting new culture.


Asked whether he would like to visi the Philippines and discover our culture someday, Tony eagerly replied, "Oh yes, definitely! I would love to do that."


I Survived a Japanese Game Show airs every Sunday (7 pm) on Studio 23.