"Banana Split" to premiere on October 11 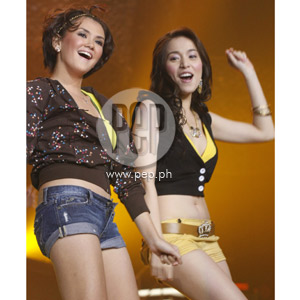 Angelica Panganiban (left) and Cristine Reyes (right) are among the stars of Banana Split, which will air every Saturday night on ABS-CBN starting October 11. They will be joined by Roxanne Guinoo, RR Enriquez, Dianne Medina, Princess Ryan, and Valerie Concepcion.


For several days now, viewers have been seeing the sexy teaser of Banana Split showing female actresses in their swimsuits playing around a water fountain. According to a PEP source, the female counterpart of the defunct gag show Goin' Bananas will air on ABS-CBN by October 11 (Saturday).

Once a week, Roxanne Guinoo, Angelica Panganiban, Cristine Reyes, RR Enriquez, Dianne Medina, Princess Ryan, and Valerie Concepcion will tantalize audiences with their sketches and comic skits. Pinoy Big Brother Celebrity Edition 2 alumna Riza Santos was supposed to join this show but she was pulled out because she had to go back to Canada.

Banana Split is a spin off of the popular sitcom that aired in the ‘90s, Goin' Bananas, which starred Edgar "Bobot" Mortiz, Johnny Delgado, Al Tantay, Christopher de Leon, and the late Jay Ilagan.


This sketch comedy showis directed by Direk Edgar "Bobot" Mortiz and his son Frasco Mortiz. The headwriter of Banana Split is Ricky Victoria, currently the creative manager of Goin' Bulilit, which is also being helmed by Direk Bobot.

One male star will be the guest of the Banana Split girls every week. Zanjoe Marudo will be their first guest in their pilot episode on October 11. John Lloyd Cruz, Diether Ocampo, Sam Milby, and Piolo Pascual will then follow suit. "Pinipila namin ang mga matinee idols ng ABS-CBN."


PAREKOY. There have been reports that there will be a predominantly male comedy show titled Parekoy that will be topbilled by John Prats, Jayson Gainza, and Zanjoe Marudo—the three stars who worked together in the defunct show Aalog-alog.