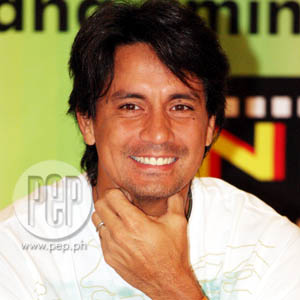 Richard Gomez will host his first game show, Family Feud, which will be on the same timeslot as Kris Aquino's game show on ABS-CBN, Kapamilya, Deal or No Deal. Richard's game show from Fremantle will air on GMA-7 by mid-October.

Richard Gomez will soon be seen in two shows on primetime television: the action series Codename: Asero and the upcoming game show Family Feud. This marks the first time that the matinee idol will try hosting a game show.

The first week will feature showbiz families but the succeeding weeks will feature non-showbiz families. He reveals that around 10 other applicants auditioned to be the host of Family Feud, but he was the one chosen by FremantleMedia to lead the show.

Prior to his audition, Goma (Richard's nickname) searched for videos showing how they play Family Feud in the United Kingdom and other countries. "The whole show—from beginning to end. Meron silang mga contestants dun."

In the game show, two families will compete against each other to name the most popular responses to a common question that was posed to 100 people. There is a prize of P150,000 that will be accumulated every day until the winning family is defeated by the challenging family.

What is interesting, according to Goma, is the fact that people don't necessarily have to be related in order to form a "family." He says that this will initially run for one season but he hopes that this will be extended.

ON KRIS AQUINO. Since Family Feud shares the same timeslot as Kris Aquino's Kapamilya, Deal or No Deal, is he afraid of challenging the seasoned game show host?

Will this show get in the way of the friendship of Kris Aquino and Richard's wife Lucy Torres? "No, no. As a matter of fact, may lunch sila together today."

Kris already knows that Richard will be hosting the show that will be her direct competitor. What is her reaction to the news? "She's very happy for me," says Richard.

The press then asked Richard if Kris used the same line as she told Charlene Gonzalez: "pa-star ka!" During the Randy Ortiz fashion show last September 4, Kris kidded Charlene for wearing a blue-and-brown outfit that supposedly did not match the motif of the event. (Click HERE to read related article)

Richard recalls, "In fact, I heard about it [the incident] right after the show. May nagkuwento kaagad sa akin."

MIGUEL ZUBIRI'S DONATION. The NMPP is a four-year old NGO that aims to give benefits to its 4,000 members—all of whom were part of, or continue to work for, the movie industry. Richard currently serves as the vice-president of internal affairs of the NMPP.

During the event, Richard expressed his appreciation for Senator Miguel Zubiri's initial P2.5 million donation that will go to the scholarship fund of the NGO.

There are three criteria that need to be fulfilled by those who want to avail of the scholarship: the applicant's father and/or mother must be a card-bearing member of the NMPP; the family must be proven financially incapable of supporting the schooling of the potential scholar; and the applicant must have good academic standing.

The tuition of 10 to 15 scholars will be shouldered by the NMPP when they enroll in state-run universities. Three of them will be tapped to take up courses related to filmmaking such as mass communication, editing, etc.

According to Senator Zubiri, he will shell out another P2.5 million in December to help subsidize the housing project of the NMPP.