Dawn Zulueta and Jake Cuenca have a prison romance in MMK 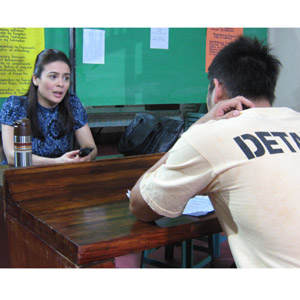 Ms. Dawn Zulueta confronts the character of Jake Cuenca (back to camera) in the September 27 episode of Maalala Mo Kaya.


When a lonely prisoner becomes close to a much older woman, tongues start wagging and intrigues begin to surface, placing both persons in a sensitive situation.

Since this is an unusual love story, how did the two stars prepare for their roles?


Dawn says that she had to be careful about the growth and maturity of her character. "Because my role had to do with a lapse of time between 8 and 10 years, I paid much attention to my appearance. Because the role required not only a progression of time in terms of age, but also had to show digressions in the character's mind-set and disposition...I was so fortunate that my director was Jeffrey Jeturian, whom I trust and have always admired...he helped me construct the fluidity of my character's mental and emotional progress."

As for the former star of the action show Palos, Jake Cuenca says that he had to re-adjust to the genre of drama once again.

He even adds: "Nagpahaba rin ako ng bigote and while taping this, I rarely broke out of my character mula simula ng taping hanggang pack-up."


What is Ms. Dawn's observations about her new leading man, Jake?

"It's the first time that I've portrayed a role that has a love interest of the younger set of stellar actors today. I was glad that Jake Cuenca played the part opposite mine because he is so talented. I didn't find it at all difficult working with him in our scenes."

The young actor is equally happy to work with the actress, who was last seen in the 2007 fantaserye Lastikman.

Jake says that he considers this episode as one of the highlights of his career. "I feel very honored to be working with Ms. Dawn, napakswerte ko talaga. Not a lot of actors in my generation have been given an opportunity like this so I'm cherishing it. This is something I will always remember ‘til the end of my career."

Watch Dawn Zulueta and Jake Cuenca figure out their complicated love story in the September 27 episode of MMK.