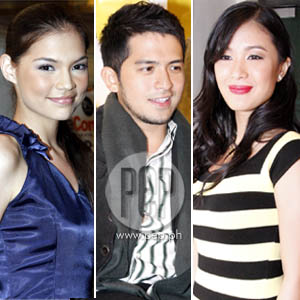 Select members of the entertainment press, including PEP (Philippine Entertainment Portal), had an intimate lunch with the lady executives of GMA-7 earlier today, September 26, at the 17th floor of GMA Network Center in Quezon City.

They shared their plans for the rest of the year and for the first quarter of 2009. Before 2008 ends, six new shows will premiere and a new season of a game show will begin.

DRAMA SHOWS. Three new primetime series are slated to replace three soaps that will end this year. First on the list is the Filipino version of La Lola, a hit comedy series that originated in Argentina. This Rhian Ramos-JC de Vera starrer will premiere on October 13, replacing Regine Velasquez's Ako Si Kim Samsoon.

Next in line is Carlo J. Caparas's Gagambino, featuring Dennis Trillo in the title role. It will premiere on October 20 replacing Dyesebel starring Dingdong Dantes and Marian Rivera.

Mark Anthony Fernandez and Heart Evangelista will team up for the first time in Luna Mystica, a romance-fantasy. This is scheduled to premiere on November 17 and will replace Richard Gutierrez's Codename: Asero, in which Heart is also the leading lady.

GAME SHOWS. Three game shows are also lined up this year. One of the longest-running game shows around the world, Family Feud makes a return to the Philippines, this time hosted by hunky actor Richard Gomez. This will premiere on October 13. Family Feud will occupy the timeslot of Arnell Ignacio's Gobingo.

Janno Gibbs's educational game show Kakasa Ka Ba Sa Grade 5? will be back for its second season on November 15. It will take over the timeslot of Celebrity Duets, which will have its finals on November 8.

Finally, a franchise of the reality TV sports show My Dad Is Better Than Your Dad, created by Survivor's Mark Burnett, is now in the Philippines. In this show, a number of dads will be paired with their kids and they will compete in each episode by playing stunts and answering questions. GMA-7 is still on the lookout for the show's host, but it is already set to premiere on November 23 after the second season of Tok! Tok! Tok! Isang Milyon Pasok ends.

It was also announced that both Bubble Gang and Startalk will celebrate their 13th anniversary this year.

FUTURE PROJECTS. Year 2009 promises to be a bigger year for the Kapuso network because of the gigantic projects lined up in the first quarter alone.

As reported earlier by PEP, Dingdong Dantes and Marian Rivera will still be paired together in their next primetime series. (Click here to read Dinno Erece's report.) Ms. Lilybeth Rasonable revealed that Dingdong and Marian will star in the TV adaptation of the 1980 drama movie Ang Babaeng Hinugot Sa Aking Tadyang, which starred Vivian Velez and the late Eddie Rodriguez.

The lady executives of GMA-7 also confirmed PEP's report that Richard Gutierrez will don the mask of Zorro as his next project after Codename: Asero. (Click here to read Dinno Erece's report.)

Another exciting project of the Kapuso network next year is the TV adaptation of Totoy Bato, which starred the King of Philippine Movies Fernando Poe Jr. In the new version, the title role will be portrayed by action superstar Robin Padilla, with possibly boxing champ Manny Pacquiao in the cast. But what really surprised us about Totoy Bato is Robin's leading lady—Regine Velasquez. This will be the follow-up project of Asia's Songbird after the highly-successful Ako Si Kim Samsoon.

Speaking of Ako Si Kim Samsoon, another Koreanovela will be adapted for Philippine TV next year—the hit drama All About Eve. A story of two rival journalists, All About Eve will star Sunshine Dizon and Iza Calzado, who have worked together before in Impostora.

Aside from My Name Is Kim Samsoon and All About Eve, GMA-7 has also bought the rights of two other Koreanovelas: the romantic comedies Full House and Coffee Prince.

Ms. Wilma Galvante revealed that Full House is really intended for Richard Gutierrez and Marian Rivera, but the casting might change depending on the availability of the two major Kapuso stars. As for Coffee Prince, GMA-7 has yet to decide who will play the lead roles.

As for the highly-anticipated Captain Barbell Meets Darna, Ms. Galvante assured us that it will finally push through next year; although she did not disclose whether Richard will reprise his role as Captain Barbell or who will play Darna.

NEW GMA BUILDING. To top these exciting projects, GMA-7 is about to inaugurate its new building on October 17. The GMA Network Studios, which is located directly across the old GMA Building on Jamboree St., will house state-of-the-art studios.

This includes Studio 4, touted to be the biggest in the Philippines and can accommodate 1,000 people. This will soon be the house of SOP and other live shows of GMA-7.

GMA-7 disclosed that they spent P1 billion for the new GMA Network Studios.