AlDub, OTWOL, and Kathniel are among the most popular Twitter hashtags in 10 years.

Pinoy loveteams are among the Top 10 hashtags in the past 10 years.

This was revealed by Twitter Philippines to mark the 10th year of the existence of hashtags.

In the Philippines, the most-used hashtag of the decade turned out to be #PHElections, referring to the May 2016 elections that saw Davao City Mayor Rodrigo Duterte become the highest official in the country.

According to Twitter Philippines, the #AlDub loveteam of Alden Richards and Maine Mendoza became the second-most used hashtag. It achieved this feat since its creation in July 16, 2015.

Alden and Maine accidentally became a loveteam during a chance encounter in Eat Bulaga. Their popularity prompted the creation of the Kalyeserye segment on the GMA-7 noontime show.

Here are the Top 10 most tweeted hashtags in the Philippines:

It all started organically when Alden Richards and Maine Mendoza were paired in the July 16, 2015, episode of noontime show Eat Bulaga.

It stands for the now defunct ABS-CBN primetime series On the Wings of Love. Nadine Lustre and James Reid topbilled this teleserye about a couple pretending to be married but end up falling in love with each other.

Kathryn Bernardo and Daniel Padilla were first paired in the 2011 teen drama Growing Up. Since then, they have gained a strong following that supported their TV shows and their movies that became blockbuster hits.

K-pop fans were very active for the July 2016 concert of Korean boyband Bangtan Boys (BTS) in the Philippines.

Super Typhoon Haima, locally named Lawin, reached Signal No. 5 in Isabela and Cagayan. It left 18 people dead when it hit the Philippines in 2013.

#Haiyan was the international name of Super Typhoon Yolanda that hit the Philippines in 2013. Considered to be the strongest tropical cyclone to make landfall in recorded history, the death toll in Tacloban alone reached 10,000.

Pia Wurtzbach was shocked, just like the rest of the world, when she was crowned 2015 Miss Universe after Miss Colombia was named as the winner. Pia became the third Filipina to win the title, after Gloria Diaz in 1969 and Margarita Moran in 1973.

The hashtag often used to announce cancellation of classes. During the typhoon season, this often tops the trending lists.

In the No. 1 slot is #ALDUBEBTamang Panahon, the concert at the Philippine Arena celebrating Eat Bulaga's 36th anniversary. In just one day, the hashtag #AlDubEBTamangPanahon received more than 41 million tweets, beating the previous Twitter record held by Brazil's 2014 Fifa World Cup defeat to Germany. 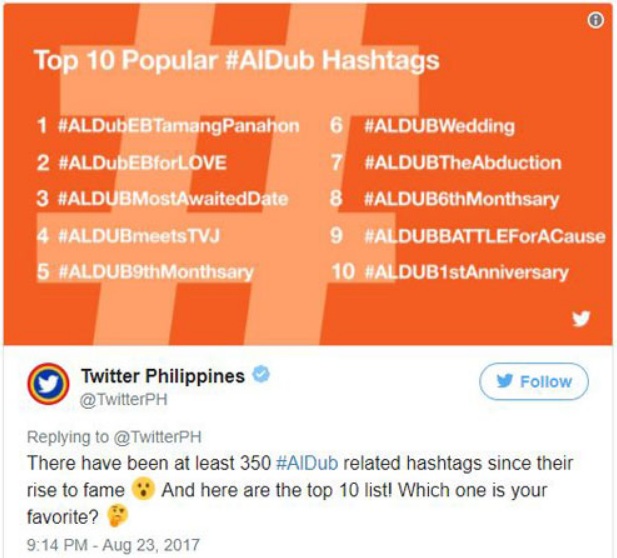