Catch "IMO," "Storyline," and "Start Up" on ANC cable channel 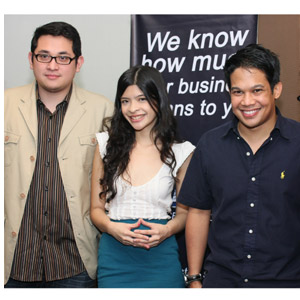 (From left) Bam Aquino of Start Up, Patricia Evangelista of Storyline, and Mo Twister of I.M.O. (In My Opinion) hope to deliver relevant information to viewers through their shows on ANC (Skycable ch. 27).


Controversial TV host and radio personality Mo Twister will be twice seen on television beginning Sunday as he takes the role of a host in ANC's new infotainment talk show called IMO (In My Opinion).

From his hosting stint in Showbiz Central every Sunday afternoon on GMA-7, DJ Mo, or Mohan Gumatay in real life, will transfer to ABS-CBN to interview different people live in his one-hour program.

IMO will be more diverse in its topic, which makes it different for DJ Mo, who is connected to local show business. Aside from local celebrities, the show will also feature a politician or other prominent names in society.

"I'm really proud of [the show]," said DJ Mo during the press conference held for the three new ANC shows including I.M.O. "I've done news and current affairs show before at Studio 23, so it's nice to be back. I know that a lot of the stuff that you see or hear from me are very showbiz-related or anything. This is different for me to be part of the show instead of, you know, always doing the showbiz side."

In this show, DJ Mo is not the only person who will have a chance to ask the show's guest. He said, "This is very interactive to the audience that's why we encourage people to call, send in SMS messages, just to get people live opinion and they get to be on television."

And for those who look forward to Mo's straightforward questions, the controversial DJ said, "I can promise you that it will be different in the sense where... I'll try my best to ask question that you'll probably don't always do on standard. Some of these are a little defensive or a little bit sugarcoated depending on the guests and the issue. The questions will really come from my research and the general public and not something that's already packaged or anything."

TWO OTHER NEW SHOWS. ANC also introduces its two other new shows that will definitely give relevant information to its viewers-the Storyline and Start Up.

Storyline, which is now on its second season, is a different from common documentaries that people usually see on TV since it doesn't have a host who will narrate the featured story.

Patricia Evangelista, executive producer of the show, pointed out, "Storyline is a story about people. That's essentially what we do, we take someone's story and we let them tell it. Storyline is a show without a host. It was a show we made very early on the show.

"We knew that there would be a trade off that some people would be looking for a host, that we need a face to sell the show, but our loyalty is always on the story and we always feel that the story is best told by the person who live through it."

Each episode of Storyline features three different stories that has one common factor. Evangelista further explained, "What Storyline does is we take an individual story and we tie it together with two other stories. Storyline has three documentaries for every episode and is linked together by a thematic framework."

As for the video narrative, independent film director Paolo Villaluna will take care of the cinematic shots. To assure tell how he will make Storyline different from the others, Paolo gave a long explanation.

He said, "Sa simula, when I was invited to direct for Storyline, I kind of told everyone from my staff, sa crew, na we will never do TV only because we kind of heard the horror story. Then, when we were approached by Ms. Glenda [Gloria, ANC chief operating officer] and Pat, when we conceptualized it na walang host, I found it really entertaining. [It's] only because both stations-ABS-CBN and GMA-7 and so many other station-have bastardized the idea of a documentary.

"The word documentary is such a special genre for a filmmaker, but the TV has bastardized it and created it into a sort of broadcast journalism. Instead of selling stories and people, they actually sell hosts. So, ang hook ngayon ng marketing, 'yong host.

"When we accepted this project, it's probably in reaction to that. Maybe there can be a venue on TV to maybe bring back old school documentary filmmaking, where you just tell the stories, no host, and with lesser intervention from the filmmaker."

Meanwhile, Start Up caters to the viewers who plan to put up their own business. Its host Bam Aquino, former host of Studio 23 defunct morning show called Breakfast, said that it will be different from other business programs that we already have on television.

Be well informed with these new shows on ANC (Skycable ch. 27). Catch Storyline every Friday at 6 p.m. with replays at 11 p.m. and Sundays at 3 p.m.; and Start Up every Thursday beginning on November 6 at 8 p.m.
Read Next
Read More Stories About
ANC, TV, Start-Up, Mo Twister, television
Post a Comment
Featured
Latest Stories
Trending in Summit Media Network