Can Charisse survive the next Tribal Council? 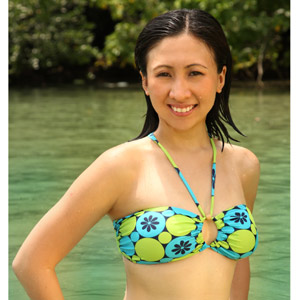 Find out if former Jarakay tribe member Charisse Yacapin (in photo) will be able to outwit, outplay, and outlast the Naak tribe members. Survivor Philippines airs weeknights on GMA-7 right after La Lola.

As the country's biggest reality show comes close to its final episodes this December, things are changing at top speed.

After the much-hated castaway Marlon Carmen was booted out last Monday, November 24, the Chalam Tribe now faces a tough decision with the succeeding Tribal Councils.

Only six Castaways are left and five of them used to belong to the tribe of Naak, a result that may very well lead to the tribe's long-time goal to bring the members of the family to the final top spots.

Former Jarakay tribe member Charisse Yacapin might look like an easy target to be voted off but she has two things working to her favor: a white pearl given by Marlon which ensures that one vote will be rendered null in case she gets voted in the next Tribal Council and a new alliance with powerhouse tribe members Rob Sy and JC Tiuseco.

With no Marlon to rely on to do the dirty work for her, Charisse is left to her own smart devices to keep herself from being the predators' prey.

Meanwhile, Cris Cartagenas and Kaye Alipio have strengthened their alliance. After successfully blindsiding fellow Naak member Kiko Rustia in the early days of the merge, the duo is confident that they could break the bond between JC and Rob to increase their chances of surviving.

Although she used to campaign against oldest tribe member Zita Ortiga, Kaye plans to lure the tribe's mother to take their side.

With new agreements and old promises broken every minute, only the Tribal Council will reveal the truth behind the castaways' plans.

Has Charisse reached the end of her road or will she hang on long enough to make it to the Final Five?

Will Naak resurrect their old family and fulfill their promise to support each other until the end?

With only two weeks left for the show, viewers should watch out for the breathtaking, shocking and exciting scenes about to unfold in Survivor Philippines. By December, the show will have its reunion and reveal the Top Two castaways who will compete for the title of Pinoy Sole Survivor. This reality show airs weeknights on GMA-7 right after La Lola.