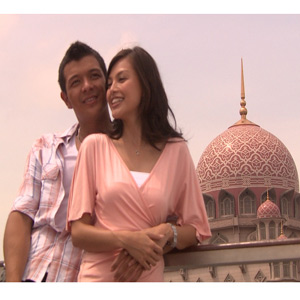 Original DVDs of Kahit Isang Saglit, starring Jericho Rosales and Carmen Soo, will be available in record bars after the show ends this Friday, December 12. ABS-CBN and Malaysia's Double Vision are in the process of collaborating with other projects in the future.

This teleserye starring Jericho Rosales and Malaysian actress Carmen Soo will conclude the love story of Rocky and Garie as they discover new things about each other. Will Rocky choose Garie or his close friend Alona (played by Cristine Reyes)? Will they be able to find peace and forgiveness? How will Rocky react when he learns about the true identity of Garie and Alona?

In the trailer they showed, Albert Martinez and Christopher de Leon had an explosive face-off in a forest that served as a catalyst for the truth to be exposed. This forces Anthony Mondragon (Christopher) to hold Garie hostage. Can Rocky save his loved one from the evil intentions of the General?

Watch the grand finale of the TV show air this Friday, December 12, on ABS-CBN Primetime Bida.

Kahit Isang Saglit is the first collaboration of the Kapamilya Network with Malaysia's Double Vision. With the joint venture, KIS was able to showcase the cultures, views and sceneries of the two Asian countries. During the thanksgiving press conference of KIS, the producers mentioned that they are planning more co-productions in the future in line with the Network's vision of going global.

Aside from the love triangle formed by Echo, Cristine, and Carmen, Kahit Isang Saglit also stars Empoy Marquez, Malou de Guzman, and Wilma Doesnt. Gilbert Perez first directed the teleserye (initially called A Time for Us) but upon his death, he was replaced by Jerry Lopez Sineneng.

Carmen expressed her gratitude for the people behind their production.

"After we finished taping the whole show, I went back to Malaysia and I was working on other things. I tried to keep in touch with them as much as I can. When I accepted this project, I didn't think it would be extremely impactful in my life. I got to know a whole bunch of people, a new country, and a new language. It affected me personally and I learned a lot. Now that the show is about to end, we shot it for so long, and I feel that it went by so fast. I can't wait for the DVD to come out so I can watch every episode," narrates Carmen.


MEMORIES OF MANONG GILBERT. Since the Philippine-Malaysian co-production Kahit Isang Saglit is about to end this Friday, December 12, the press asked director Jerry Sineneng if he thinks Direk Gilbert Perez would have approved of his way of handling the teleserye.


Even though Echo did not get the chance to have his own way, he was able to learn a valuable lesson: "It's about being humble and trusting," he says.

What else will he miss about the show?

Albert Martinez plays the man whom Garie recognizes as her father, Ronaldo Dimaandal. He enumerates the reasons why he thinks Kahit Isang Saglit was accepted readily by viewers.

Kahit Isang Saglit will be shown in Malaysia starting January 2009. The DVDs of the first three volumes of KIS will be available in record bars when the show ends this Friday, December 12.