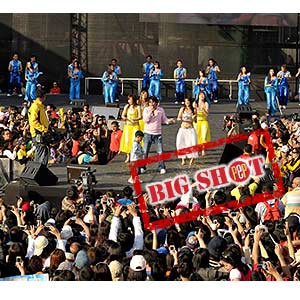 
Willie Revillame brought happiness to our kababayans in the Middle East when he visited Dubai for the first time last January 30, 2009.

This marks the beginning of Wowowee's 2009 TFC World Tours, which is part of the 15th anniversary celebration of The Filipino Channel (TFC) and the 4th anniversary of the ABS-CBN noontime show. The event, dubbed as "WowoWillie: Round the World...Touchdown in Dubai!" is also part of Willie Revillame's birthday.

Dominique Pechuela-Famador of ABS-CBN Global in the Middle East shared photos and her description of the event that was highly anticipated by our kababayans abroad.


Dubai, UAE—"TFC World Tours' Wowowee in Dubai held at the Dubai Festival City on January 30, 2009 is one of the most anticipated Filipino live shows in the UAE. By January 29, a day prior to the event, more than 19,000 ticket sales were recorded. As early as 8 'o clock in the evening of the 29th, the first batch of fans from Abu Dhabi arrived ready to brave the cold outdoor just to have a guaranteed front row [seat] of the event. They placed a mat beside their parked automobiles and shared a 'picnic' before retiring for the night.

At 9 o'clock in the morning of THE DAY, about 700 people lined up piling hundreds and hundreds more by the minute. The gates were supposed to open by noontime but the organizers had to move it an hour earlier to give space to the massively growing crowd. Inside, the eager audiences entertained themselves by visiting the booths offering food and beverages, merchandise and special offers. Sponsors provided a distraction from the hours of waiting by raffles of token items, upcoming event passes among others. The throng would cheer at the sight of video and still cameras or to the tune of advertising jingles. The ticket holders, through their raffle stubs, had their chance to get picked for the 'Pera o Bayong' portion prior to the beginning of the show.


Bottles of water distributed by the organizers would comfort the thirsty and heat-exhausted mob only for a short while. They waited impatiently under the heat of the sun on that winter afternoon just to see Papi and the rest of the Wowowee gang.


The talented formerly Dubai-based Pinoy Dream Academy scholar Liezel Garcia charmed the crowd with her renditions of 'Disturbia', 'Take a Bow', 'Kailangan Ko'y Ikaw.' She shared her experiences on her unrelenting faith that her dreams will come true, encouraging her once fellow OFWs to never stop striving for what their hearts yearn. Owen psyched the whole of the venue up to be fully recovered from their weariness with his perky introduction prior to selecting the 20 Bigat-10 for the 'Hep Hep Hooray!' segment.

Willie yelled his signature "ARE YOU READY?!" before emerging onstage. The audiences were revved up of Willie's medley of his singles 'Wowowee', 'Buksan Mo Papasukin Ako', 'Umaalog-alog', 'Sayaw Darling', 'Rock n Rollin',
'Igiling-giling' by which he was joined by his lovely lady hosts onstage. Joining the ensemble are Filipino dancers from Dubai that Papi himself called 'ASF Dubai.'


Willie picked the 20 Bigat-10 among the best 'Igiling-giling' dancers who are lucky to get a close proximity from the stage. All twenty Hep Hep Hooray challengers received gift packs from sponsors. Included in the game was a Palestinian married to a Filipina who was thrilled to join the merry-making. A salon-worker who waited from 6 o' clock in the morning won the prize of P100,000 for the portion.

Valerie, Mariel and RR were then joined by Lito Camo to render a 'Camo Medley' reprising the novelty composer's most popular hits. Winning the Big Time Pera O Bayong jackpot prize of a house & lot and a total of P100,000 in cash is Aling Flor—a former domestic helper living in the UAE for twenty-two years and a mother of four kids.

A rather posh Pokwang clad in black sang Rihanna's 'Please Don't Stop the Music.' The people got more keyed up to see an audience join her on stage frantically dancing to her song. A proud former OFW, shared her first time in Japan in her most comical self. Her stand-up comic act blended very well with songs from her album.

A male audience unreservedly sang 'One Moment in Time' with Pokey. The most poignant segment of the program was the 'Willie of Fortune' where our kababayans were shown struggling and surviving for many years in the UAE. As a bonus, surprise emotional messages from their loved ones back home were shown to the large screens onstage. Everyone felt like a 'kapamilya' as they witnessed that brief reunion between the contestants and their families. Aling Pacita won in the final elimination round 'Tanong ko, Sagutin Mo' gearing her for the 'Pasalog' game. All-in-all she won a total of P65,000 cash and brand new car.

Charice, the 'most talented girl in the world' dubbed by Oprah Winfrey no less, wowed the crowd gathered in the Dubai Festival City concert arena. Her powerful voice filled the area as she belted Celine Dion's greatest hits 'Alone' and 'Because You Loved Me.' This is Charice's first visit to Dubai. She took this advantage to shake the hands of her Dubai fans for the first time. And Dubai apparently just can't get enough of her.

In time for nightfall, he requested everyone to light their mobile phones as a form of unity. The crowd unified as one as Willie sang his offering single 'Munting Hiling' dedicated to the Filipino heroes all over the world.

A tear-jerking AVP showed stories of the overseas Pinoys world and their families who miss and love them unfolded in the set of Wowowee. Closing the night was Willie's medley of love songs while the girls of Wowowee gave away t-shirts to the multitude. By the end of the long-awaited event, the humid atmosphere was replaced by much cooler weather of the night. Through four hours of fun, music and prizes, Papi worked his magic yet again, mingling with and warming the hearts of thousands of his believers...this time in Dubai."