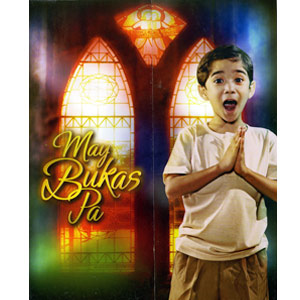 
Amidst the ongoing global financial crisis, ABS-CBN offers a new primetime soap opera that will give Pinoy viewers hope, especially those who are desperately seeking for miracles.

May Bukas Pa was actually the type of program that ABS-CBN President Charo Santos-Concio wanted to have on the Kapamilya Network during this time of crisis. Rondel Lindayag, overall-in-charge of creative for the show, recalled how they were approached by the ABS-CBN bigwig to create such a program.

May Bukas Pa, inspired by the Spanish novel that was adapted into a movie in 1955, tells a story of a young boy called Santino (Zaijan Jaranilla). He was abandoned by his mother in the monastery when he was still a baby. Here, the three priests named Father Anthony (Jaime Fabregas), Father Jose (Dominic Ochoa), and Father Ringo (Lito Pimentel) raised the orphaned child.

Pining for the love of his mother, Santino finds comfort in a confidant whom he calls "Bro." The priests believe that "Bro" is the young boy's imaginary friend. Later on, Santino will soon be involved in miraculous events that he claims to be the work of his friend "Bro." Meanwhile, the townsfolk who witnessed these events start to believe that the young kid has received a miraculous gift from God.

Find out how Santino's strong faith in his "Bro" will affect the lives of the people in their small town called Pag-asa. Watch May Bukas Pa starting tonight, February 2, on ABS-CBN's Primetime Bida right after TV Patrol.