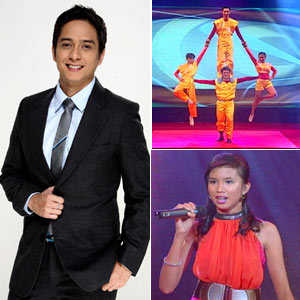 Hosted by Ryan Agoncillo (left frame), Talentadong Pinoy give exposure to amazing Filipinos such as the Guttierez family (upper right frame) and Jessa Mendoza (lower right frame) who is now a cast member in Lipgloss.
Aiming to unearth Pinoys' hidden talents, TV5's Talentadong Pinoy has been serving as a vehicle for contestants to realize their dreams and maximize their potential. The weekend show, hosted by Ryan Agoncillo, has generated not only amazing talents but amazing success stories as well, including those of Jessa Mendoza of Lipgloss and Elmo Rodriguez of Kiddie Kwela, to name a few.

From sampaguita vendor to a privileged Lindenite—Jessa, a 15 year-old singer from Caloocan, joined Talentadong Pinoy and was eventually cast in Lipgloss. Armed with her singing and acting prowess, Jessa now plays the role of Carla—Mikee Lee's love interest in the youth-oriented show.

Three year-old boy Elmo Rodriguez showcased his dancing talent. He did not make it to the next challenge, but he surely won the heart of Kiddie Kwela executive producer Faye Martel, giving the kid a stint in the kiddie show.

TV5's voice-over talents are not that many, but a single talented man named Mark Mangaliman, who is famous for being called "the man with 60 voices." Hailing from Sta. Mesa, Mark joined Talentadong Pinoy and subsequently became Shock Attack's official VO master.

Talentadong Pinoy's "Freestyler Dance Troupe" front man Carl Acosta—a five year-old boy with an amazing terpsichorean gift, was talented enough to impress the show's juror, Audie Gemora, to give him a role and include him in the 2009 remake of Joseph the Dreamer.

The talents of Pinoys literally take them places. In one of the show's episodes, an acrobatic family was featured being escorted by the production staff to the airport—the Guttierez family, Talentadong Pinoy's three-week contender, received a career offer in Taiwan, paving them a way for bigger opportunities and international fame.

Be entertained with amazing talent showcases and hear more inspiring stories of dreams turning into reality in Talentadong Pinoy, airing every Saturday at 7 p.m., only on TV5.