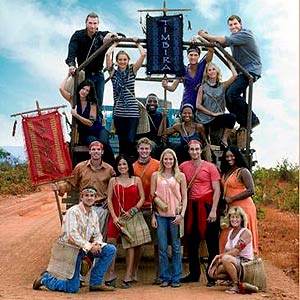 Survivor: Toncantins (Season 18) was shot in the Brazilian Highlands. Follow the adventures of the castaways when the show airs on Q Channel 11 starting February 13, 2009.
"Survivor" fever is off to a scorching start as Q Channel 11 premieres Season 18 of the Emmy Award-winning reality TV show this Friday, February 13.

Dubbed Survivor: Tocantins, the new season continues the cherished traditions of the past seventeen seasons—which includes the jaw-dropping cash prizes, millions of loyal viewers, numerous adaptations in several countries across the globe—and then, it cranks up the ante for an even more exciting show.

Simply put, it's going to be brutal this season. Tocantins, the Brazilian Highlands, is said to be one of the series' most rugged locations ever. The area is certainly rougher than Season 6's Survivor: Amazon, the show's first foray to Brazil. Season 6 was set in the rainforest near Manaus.

Survivor: Tocantins, on the other hand, is right smack in the central part of Brazil, in a high-altitude desert area that's scorching, with temperatures that hit nearly 110 degrees early in the morning. The only relief it offers from the harsh conditions is a river oasis known as Rio Novo. This is tougher than the tropical locations that have been used in several seasons of the show and the conditions are certainly not as temperate as in Gabon from last season.

Right off the bat, the castaways of Survivor: Tocantins will be divided into two separate tribes. Afterwards, these diverse individuals will be forced to begin their game plan and strategies based solely on their first impression of each other. And then, it gets even tougher—minus any formal introduction, let alone a chance to speak to one another, one castaway from each tribe will be chosen to remain behind. This could mean a quick end for two castaways or, maybe, just maybe, there could be a second chance waiting for them.

What's for sure is that the castaways will be left stranded in the majestic interior of Brazil for 39 days—battling scorching temperatures, torrential downpours, dangerous wildlife, and of course, each other.

Who will outwit, outplay, and outlast his or her fellow castaways and ultimately walk away with the title of being the Sole Survivor? Find out on Survivor: Tocantins—hosted by Emmy Award-winner Jeff Probst—which airs beginning February 13, 3:00 pm, on Q Channel 11.