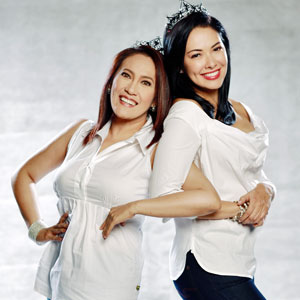 
Two queens unite to give a fully-loaded morning to televiewers on weekdays.

The two TV hosts promise to give an alternative to the morning viewing habits of Pinoy by giving them practical tips on money-making schemes, micro business, resource-saving techniques and other information that are very useful in every day life.

Aside from different featured subjects, people will also see a different Ruffa and Ai-Ai as they go about their stories. Ruffa said that she's going to be really friendly on this show in contrast to her character as Daniella, the kontrabida to Bea Alonzo in I Love Betty La Fea.

When it comes to chemistry, the two think that they won't have any problem working with each other, since they also work together in I Love Betty La Fea. Aside from this, with the long-running show as their main competitor, the two hosts said that they should team up to give the viewers a good show.

Catch the premiere telecast of Ruffa and Ai this Monday, February 16, at 10:15 in the morning on ABS-CBN.