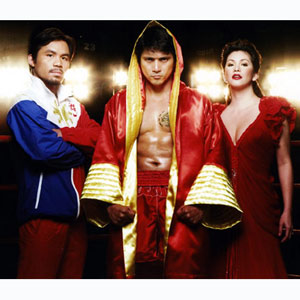 After a successful and breathtaking journey in Joaquin Bordado, a New York Festival finalist for the Action/Adventure category, action superstar Robin Padilla is back on the primetime block to depict the remarkable life of a boxing champ called Totoy Bato.

Regine is reunited with Robin after being paired together in the 2006 film Till I Met You. She will be portraying the role of Anna, Totoy Bato's love interest and inspiration in all his struggles. Meanwhile, multi-awarded actor Eddie Garcia, who worked last year with Robin in Joaquin Bordado, will play the strict but caring coach of Totoy Bato as Coach Fredo.

Also featuring in the program are veteran actors Ian Veneracion as Miguel, the wealthy foe of Totoy in Anna's attention; Caridad Sanchez as Concha, the religious grandmother of Miguel, Joonee Gamboa as Mauro, Totoy's kind-hearted uncle; Ronnie Lazaro as Podong, the ex-convict and abusive father of Totoy; Rommel Padilla as Manuel, Miguel's brother and a syndicate leader; and Deborah Sun as Matilda, Anna's materialistic and selfish mother.

Completing the cast are Ehra Madrigal as Trixie, a guest relations officer who will fall in love with Totoy; Jolo Revilla as Andong, Totoy's friend in the city; LJ Reyes as Gilette, Anna's cousin; Tuesday Vargas as Connie, Anna's assistant; Mon Confiado as Turko, a former military man who will be Totoy's worst opponent in the ring; Sweet Ramos as Cecilia, Totoy's one and only daughter; Ralph Padilla as Steve, Totoy's assistant in Manila; Ara Mina in a special participation as Elena, Totoy's wife and introducing Queenie Padilla as Heather, the daughter of the haciendero that will grab Totoy's land.

Totoy Bato was originally created for comics by Komiks King Carlo J. Caparas. In 1977, it became a blockbuster movie starring no less than the King of Philippine Movies, the late Fernando Poe Jr.

SYNOPSIS. Totoy Bato's television version is directed by Mac Alejandre and Don Michael Perez. The story begins with the dreams of best friends Totoy and Anna. Anna dreams to be a popular and successful singer someday. Her friend Totoy, on the other hand, only dreams of being with his father. After his mother died and his father sent to prison, Totoy was left under the care of his loving uncle.

In a matter of time, Totoy's wish comes true when his father comes home after serving his sentence. However, problem arises when Podong turns out to be an abusive and cruel dad. Totoy's only comfort is Anna, his best friend and true love.

Anna, who promised never to leave his side, breaks her promise when her materialistic mother Matilda decides to live with her beerhouse client in Manila. Anna leaves Totoy with a promise that she will come back for him.

Years pass and Totoy becomes a farmer and a family man. He is happily living with his wife Elena and their daughter Cecilia in Baryo Gapas. His fervent dream is to have a bountiful harvest to make ends meet and if possible send his daughter to college. Meanwhile, Anna is now a famous singer in the country.

The quiet life of Totoy will be disturbed when a land grabber appears and kills his loving wife Elena. Madness and revenge engulfs Totoy and he promises to fight the manipulative haciendero no matter what. When the battle for the land title has won, Totoy decides to leave Baryo Gapas and start a new life in Manila. Here he will meet people that will change his life for good as he faces more fights—this time in the boxing arena where he will be known as Totoy Bato.

Be a ringside witness as the bigger and bolder fights of Totoy Bato unfold beginning Monday, February 23, on GMA Telebabad.