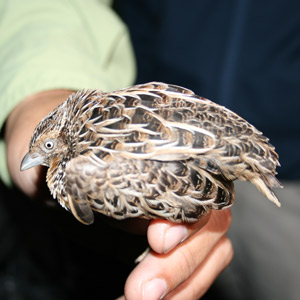 In January 2009, the I-Witness team was able to photograph and video this rare Worcester's Buttonquail (Turnix worcesteri) at Dalton Pass in Nueva Vizcaya.
A rare bird found only in the Philippines has been photographed alive for the first time and confirmed to still exist, the Wild Bird Club of the Philippines reports.

The Worcester's Buttonquail (Turnix worcesteri) was recorded on both video and stills photography by a documentary team from GMA Network at Dalton Pass in Nueva Vizcaya last January.

"This is a very important finding," said Arne Jensen, a Danish ornithologist and biodiversity expert, long-time resident of the Philippines and head of the Records Committee of the Wild Bird Club of the Philippines. "Once you don't see a bird species in a generation, you start to wonder if it's extinct, and for this bird species we simply do not know its status at all."

The Worcester's Buttonquail is found only on Luzon and it may be a threatened endemic species. Unfortunately, there is extremely little information about this bird. Its breeding area remains unknown although it is suspected to be a rare resident of the high mountain grasslands of the Cordilleras. It was first described based on specimens purchased in Quinta Market in Manila in 1902. The bird was named after Dean Conant Worcester, an American zoologist and public official specializing in the Philippines around that time.

Since then just a few single specimens have been documented from Nueva Vizcaya and Benguet, and lately, in 2007, from Mountain Province by Chicago's Field Museum of Natural History.

The endemic bird, whose drawings in bird guides were based on dead museum specimens collected decades ago, was caught by native bird trappers in mid-January and documented by an I-Witness team led by Howie Severino.

"We are ecstatic that this rarely seen species was photographed by accident," said Michael Lu, president of the Wild Bird Club of the Philippines. "It may be the only photo of this poorly known bird. But I also feel sad that the locals do not value the biodiversity around them and that this bird was sold for only P10.00 and headed for the dining table! What if this was the last of its species? Much more has to be done in creating conservation awareness and local consciousness about our unique threatened bird fauna. This should be an easy task for the local governments assisted by the DENR."

Severino and his team had not realized what they had documented until Desmond Allen, a British ornithologist who is a member of the Club, spotted a photograph of the bird in the credits of "Bye-Bye Birdie," the team's recent I-Witness documentary about the bird-trapping tradition in northern Luzon.