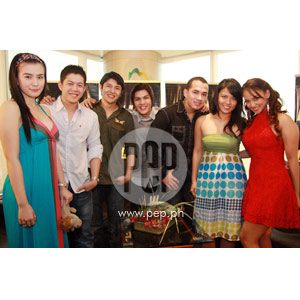 
The last seven Pinoy Fear Factor participantes—namely Manuel Chua Jr., Jommy Teotico, Marion dela Cruz, Janna Dominguez, Savanah Lamsen, RJ Calipus, and LJ Moreno—already had a slight idea about the challenges that were prepared for them in Argentina, South America. In a previous press conference, most of them mentioned about the stunts they saw in different versions of Fear Factor of other countries, but they are not sure if they would be able to these themselves.

Since the show is about to end tomorrow, three of the last seven contestants looked back and related the most challenging stunt they did during their stint in Pinoy Fear Factor.

Returning actress participante LJ said that the hardest stunt she did was the one where she became the eliminated participante. She lost her chance during the last stunt of the "sexta ronda de eliminacion," which was the inverted bungee stunt that required her to hold her breath underwater while hanging upside down.

Meanwhile, Savanah lost her chance to become part of the final four participante when she slipped in the rotating wall stunt of the eight round of elimination.

FINAL FOUR. Before Manuel got booted out last night, February 18, because he took too long in coming out from the box that was buried by sand. During the press conference last Monday, he was asked regarding his will to win the game.

However, the man who set two Fear Factor world records failed to become the"El Ultimo Participante" in a close fight with Janna.

Jommy, on the other hand, said that since he was already there, he might as well finish the every stunt with whatever he got.

Like Manuel and Jommy, Marion was also determined to get the "El Ultimo Participante" title, the house and lot, and the P2 million. However, he said, he never expected that he would be able to build a good friendship with other contenders.

The only girl among the remaining three contestants said that although she's really close to her co-participantes in El Campo Miedo, she does not think of it while they were doing the challenges.

Find out who will be the next eliminated participante as Jommy, Marion, and Janna face the second stunt of the ultimo ronda de eliminacion tonight, February 19, after Showbiz News Ngayon on ABS-CBN Primetime Bida.