Cheska Garcia reveals she is pregnant with a baby girl 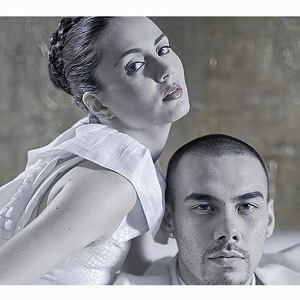 Cheska Garcia revealed the difficult and memorable moments she had during the first few months of her pregnancy. She and her husband Doug Kramer graced the February 15 episode of the Studio 23 show Us Girls.
Celebrity couple Cheska Garcia and Doug Kramer appeared on the Studio 23 show Us Girls last Sunday, February 15, to reveal the great news about their new family member. The sister of Patrick Garcia will soon be giving birth to a baby girl!

A few months after their wedding last October 2008, Chesca experienced physical manifestations that made her realize that she was pregnant. "I wasn't delayed yet when I found out that I was pregnant. I just had the feeling, kasi iba yung kain ko, I got so tired so fast." The soon-to-be mom granted the exclusive interview to her Us Girls co-hosts, Angel Aquino and Iya Villania. When Iya asked how her appetite changed, Cheska described, "More, saka parang sarap na sarap ako." Her husband Doug even added, "Grabe kumain yan, saka sumasabay sa kin yan, she eats so much."

The soon-to-be parents also narrated the first time they saw the baby on the monitor when Chesca had her first checkup. "The first checkup obviously there was really nothing there, our confirmation lang na I was actually pregnant. The second checkup that was really funny," recalled Cheska.

Doug continued: "Inside her sacks was parang a swimming pool ng baby, so very small pa sya but then you can see through the monitor there parang it was like floating around there, and I could see that she hit like the bottom of the sack and then she went like this [Doug acts as if swimming] gumanon s'ya. Sabi ko boy kaya to, kasi gumanon s'ya tapos ano to swimmer? Pero any gender will be fine with us, but for me I wanted to have a girl. And everyone like all of our family were saying boy 'yan, boy 'yan. Sabi ko hindi, I know best, that's a girl!" said the basketball player with confidence.

Even though they are very excited about the arrival of the new member of their family, Cheska and Doug are also taking steps to prepare for their responsibilities as new parents. "I've been attending parenting seminars. Si Doug hindi s'ya nakakapunta kasi he has practice, so I'm making kwento about the seminar, on how to discipline your child, on how to bring your child up, so it's nice because I'm also with my kabarkadas who have kids already," reveals Chesca.

Before the exclusive interview ended, Doug and Cheska expressed how much they cared for each other and how excited they were about the arrival of their first baby girl whom they have yet to name.

Us Girls airs every Sunday night on Studio 23 at 7 pm.