"Dingdong Dantes is setting the Philippines on fire!" –Eunice Olsen of The Duke 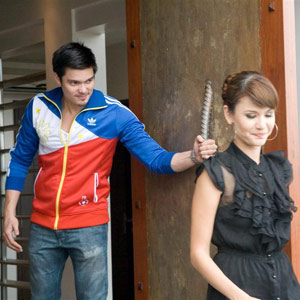 Dingdong Dantes was interviewed by Eunice Olsen for the February 9 pilot episode of The Duke. The Singaporean beauty queen is one of three hosts of the new AXN show.
The Duke host Eunice Olsen declares that Dingdong Dantes is "setting the Philippines on fire with his skyrocketing career!"

This was how the female host of the new AXN show described the male lead actor of GMA-7's Ang Babaeng Hinugot sa Aking Tadyang. The high-end lifestyle television magazine program aired its pilot episode on AXN cable channel last February 9 with Dingdong as the first "Duke" introduced on the show. According to their definition, a Duke is a man in control of his life, someone who is driven and has a big dream to achieve success in life.

Wearing a Philippine flag-inspired jacket, Dingdong himself toured Eunice in his 300 square-meter bachelor's pad, which was featured extensively in the October 2008 issue of YES! Magazine. "I have to congratulate you because you have been chosen as the Top 25 Sexiest Men in the World," says the former Miss Singapore.

How does it feel to be placed third after UK soccer player David Beckham and Argentinian actor Michael Gurfi? "I haven't seen the whole feature yet," admits Dingdong. "But I've been told that they put me in a good spot."

The Filipino actor is joined by Enrique Iglesias, Johnny Depp, and other hunky men chosen from all over the globe. (Click HERE to read the complete list of E! Television's Top 25 Sexiest Men of the World.)

Eunice then showed a cute photo of Dingdong when he was still a toddler. "You started modeling when you were very young, how old were you then?" He says he was seven years old when he started being in the limelight.

"My parents supported me from day one. They had no qualms about me being an actor. That makes it so much easier. They saw the passion and the enthusiasm so they supported me," says Dingdong with a smile.

Dingdong and Eunice continued their tour around the house as they discussed the actor's collections of paintings and toys. She curiously asked Dingdong how he made the transition from being a model to being an actor.

"I guess from modeling since my early years, I already had a calling for it. It's really in me, you know? I enjoy it! In fact, when I was starting, I did it for free."

What is the most fulfilling part of being an actor? "It's when I come across people who tell me, ‘Hey, I watched your show and it's the only show that brings our family together.' There was this one person who told me that one of my shows was the life of his mother because she got hooked on the show. She watched it everyday and when the show finished, she passed away a few days after."

Dingdong sums up: "These kinds of comments give me high morale."

After spending some time indoors, the two of them went outside to see and take a ride on Dingdong's favorite toy: a bright yellow, two-door Bumblebee car.


STAYING POWER. For the second half of the episode, Eunice had a sit-down talk with Dingdong to ask him regarding the secrets of his successful career. How do you stay away from all of these [intrigues]?

"You can't stay away," says Dingdong matter-of-factly. "You just have to face them coz that's part of your life...to be under public scrutiny. You just have to stand up for what you believe in."

How did he manage to stay ahead of the game for the past years? "Maybe I just managed to reinvent myself. I was just free-spirited. Just be yourself. If people like you for who you are, then thank you. People love personalities who are easy to approach and I can relate with. I believe I have some of those traits."

The former beauty queen put the Pinoy actor on the spot by asking him, "How much of your success is attributed to your good looks?"

"For one, I don't really consider what I have...I don't want to think I'm successful yet because once that gets into my head, it will automatically stop me from dreaming more. But it's not just about the looks, it's the personality and more importantly, it's the talent."

Is there a certain image that you have to live up to? "In all my endeavors, I present myself as myself. Who I am on camera, more or less is the same me."

Eunice asked Dingdong to enumerate the qualities that could possibly make a man a "Duke." He replied by saying, "He should have his objectives, he should make them clear, make them straight. He should not step on anyone's toes. It may not be easy but it's a fun ride."

Aside from Eunice, the other hosts of The Duke are Marc Nelson and Rovilson Fernandez.
Read Next
Read More Stories About
Dingdong Dantes, TV, television
PEP Live
Post a Comment
Featured
Latest Stories
Trending in Summit Media Network