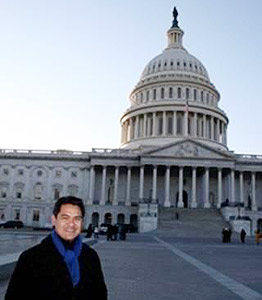 GMA-7 reporter Jiggy Manicad poses in front of the U.S. Capitol during his coverage of President Barack Obama's inauguration last January. His documentary on the black president will be aired during the pilot telecast of World View, which will premiere on March 1, 2009.
Last January, veteran GMA-7 broadcast journalist Jiggy Manicad flew to Washington and joined the millions who witnessed first-hand a historic event: the swearing into office of the first African American president, Barack Hussein Obama.

"...We have come so far. We have seen so much. But there is so much more to do," said the 44th President in the speech he delivered on Election Night, a foreshadowing of the numerous challenges and hard work he expects ahead of his administration.

As the new president searches for solutions to his nation's economic problems, will he devote time to address those involving ours? For the first episode of World View, GMA News and Public Affairs' newest program focusing on how global issues affect Filipinos here and abroad, Jiggy Manicad examines the effects of US President Obama's administration on Juan dela Cruz.

After 21 months of tirelessly and patiently campaigning, Barack Obama finally attained the Presidency of the United States of America. Meanwhile, more than a decade of tireless and patient struggle left aging Filipino World War II veterans still fighting for the same benefits as their fellow American veterans. Has the time of the Filipino Equity Bill to be approved come with the election of the first black president?

After losing her job, Beth fears losing her home as well because her house is about to be foreclosed due to unpaid mortgages. Adding to her woes is the recent deportation of her husband to the Philippines. With a sick mother to take care of and three children still in school, Beth worries that her American dream is about to become a nightmare. How secure are Filipino-Americans directly affected by the recession? How high are they in the list of priorities of the new president?

And just like Beth, a lot of Pinoy job seekers are losing hope getting employed in the land of opportunities. Major companies are either declaring bankruptcy or are in a freeze-hiring mode including many hospitals that used to hire many Filipino doctors and nurses. Will the situation change with the present administration?

In the midst of all these uncertainties, many fear the strong relationship between the US and the Philippines is weakening as President Gloria Arroyo once again failed to seek audience with President Obama.


What lies ahead for the United States of America and the Philippines? Don't miss the pilot episode of World View, airing on March 1, Sunday, after Ful Haus on GMA-7.