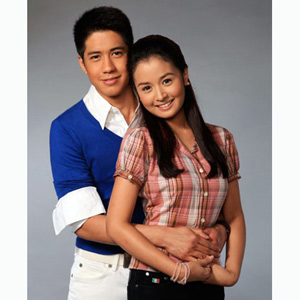 
The award-winning movie, under the direction of Emmanuel Borlaza, was a blockbuster hit in 1984 starring Sharon Cuneta and Gabby Concepcion. The movie won two awards in the 1985 FAMAS Awards: Best Actress award for the Megastar and Best Theme Song for George Canseco.


Today, the movie-turned-TV series directed by Maryo J. delos Reyes will touch viewers with its heartbreaking story about two persons who plunge into marriage at a very young age.


Kris Bernal will play the role of Myrna, the character originally played by Sharon while Aljur portrays the character of Lito, played in the movie by Gabby Concepcion. On the other hand, Ara Mina plays the role of Glacilda, the villain role portrayed by Chanda Romero on the film.


The story begins when the rich, happy-go-lucky college student Lito (Aljur) meets the beautiful, straight-A student Myrna (Kris) in a very strange situation. Myrna is accidentally caught in the middle of a clash between two warring fraternities where Lito (Aljur) is a member. Lito, who is smitten by Myrna's beauty, will try to save the young lady. After the fight, Lito introduces himself to Myrna, thus, the beginning of their beautiful relationship.


Since Lito and Myrna possess opposite personalities, their friends are all against their relationship. Myrna, who comes from a strict and conservative family, doesn't have the courage to tell her parents about their romantic relationship with Lito, a spoiled brat who comes from a broken family.


To keep themselves from being apart, the young couple decides to elope leading them to fall into the serious responsibilities of marriage. Life will never be same again for the couple Lito and Myrna. With their opposite interests, the young couple will find themselves slowly falling apart.


But the real problem sets in when Lito deceives his wife and welcomes into his life the wealthy, bold and beautiful young widow Glacilda (Ara), the eldest sister of Lito's bestfriend Phil (Carlo Aquino). Longing for love and attention, Glacilda snatches away Lito from his wife and vows to keep him in her life.


Will the young good-natured Myrna fight for her rights? Or will she just keep mum about her husband's affair? With her friend Kiko (Paulo Avelino) always on her side, will Myrna betray her husband to get even? Is Lito truly in love with Myrna? Or he is just in search of a mother-figure who will take care of him? Is love the real binding force that leads Lito and Myrna to plunge into an early marriage? Will true love bring them back together?