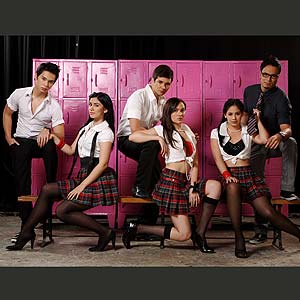 Since the original movie was quite sexy, these young stars will be taking on mature roles. However, director Manny Palo said there would be some restrictions since he's working with underage actors.

"'Yon lang actually ang ginaya namin. In terms of treatment, magkaiba. Most of you have watched the original version of Underage it's a canned classic, right? This one, it's more real, it's updated, it's more truthful.

"Kaya nga noong tinatanong nila ako, Rafael asked me, ‘Do we really have to watch the original Underage?' Sabi ko, ‘Yeah, you can, to be familiar with the story.' 'Tapos sabi niya, ‘Gagayahin ko ba 'yong character ko in that film?' Sabi ko, ‘No, no, iba ang attack that we're going to do here, dito sa version ng Your Song."

Originally directed by the late director Joey Gosiengfiao and written by Toto Belano, Underage will be the initial offering of ABS-CBN's Your Song Presents TV adaptation of well-loved teen flicks in the '80s. With the permission of Regal Films, the weekly drama series will also feature Katorse, Blue Jeans, and 14 Going Steady.

Don't miss the pilot episode of Underage, which was considered as the launch pad of Dina, Maricel, and Snooky, tomorrow, March 1, after ASAP '09 on ABS-CBN.