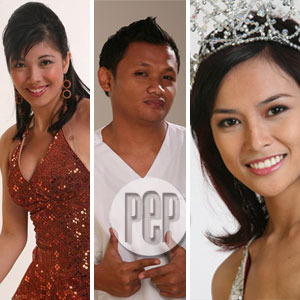 PBB Season 2 housemates include (L-R) Saicy Aguila, Nel Rapuz, and Wendy Valdez—all of whom are aspiring to be the next grand winner.

New housemates. New rules. New shockers. All these were in place as ABS-CBN once again opened the doors to the iconic Big Brother house for the long-awaited second season of Pinoy Big Brother.

The season started with a surprise when the new housemates were required to enter the PBB house in handcuffs, leading into the "Unlock Me" challenge. Even more shocking was the fact that there were only six housemates entering the house this time—less than half the number of housemates expected to enter at the Big Opening.

Pinoy Big Brother mastermind Lauren Dyogi explained that this new development was specially cleared by PBB with Big Brother franchiser Endemol. He says, "We realized that twelve housemates might be too many for viewers at this time. We want the audience to get to know these six housemates Kuya handpicked, and then we'll bring in the new housemates at the appropriate time."

Outside of these six, PBB also promises six more new housemates, including a "Loveable Sweetheart," a "Prodigal Son," a "Good Son," a "Diskarte Queen," a "Basketball Hunk" and a "Sassy Girl."

After the Big Opening, new house rules were given to the housemates, including:

(1) The housemates should eat lunch between 12 NN and 12:30 PM, or forfeit lunch altogether.

(2) The new housemates must not gain more than 5 lbs during their entire stay.

(3) Smoking inside the PBB house is forbidden. The garden is the only place where smoking is allowed.

(4) Waste segregation must be strictly observed.

(5) The plasma screen must always be closely monitored for instructions.

The housemates are also only allowed up to 30 kilos of clothes and food combined, so the housemates had to lose a number of their possessions on their first evening.