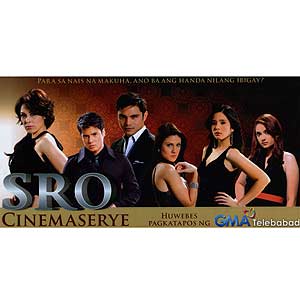 The said show is an eight-part weekly drama anthology that aims to showcase the flexibility of Kapuso celebrities. Every Thursday night, the talents of GMA Network will be put on the spotlight to offer Pinoy viewers the cinematic quality of a real motion picture on television.

In "Ganti," Maxene will play the role of Eloisa, the secretary of a hotel mogul Viola Ojeda (Sheryl Cruz). In the sneak preview shown to the media, she flirts with actor Marvin Agustin—surprising most viewers who attended the press launch of the show held recently.

Maxene said that this show is a good medium for her to step out of her "sweet image."

"Okay lang kasi from Una Kang Naging Akin (2008), may something similar sila," Maxene said about her character in the show. "I really like it like that, na gradual 'yong transition, hindi biglaan. Here, it's similar to what I've done in Una Kang Naging Akin except that medyo may pagkakontrabida ang role ko pero with a heart, hindi niya talaga alam kung saan siya lulugar.

She also said that SRO will be a good opportunity for her to discover something new about herself.

"Everyone looks into me always like a baby and sweetheart ganyan. I really wanted to grow and develop into something else. Hindi naman sobrang sexy talaga, but then, I want to step away from what I missed doing in the past. Gusto ko naman i-explore kung ano ang kaya kong gawin."

Like Maxene, Geoff Eigenmann also thinks that playing the role Kevin Rodriguezin SRO is the most mature role he has done in his career.

"This is, I can say, the most mature role I've ever done. I can say na I graduated na from all the teenybopper stuff. I've done mature roles, but this, to date, is the most adult. Most mature kasi it's a very deep character, very deceiving, very conniving, marami siyang tinatago, marami siyang hinanakit na gustong ilabas."

He added that SRO also became a challenge for him to improve his acting skills. "It's very different," said Geoff. "I guess, dito na talaga dumarating talaga 'yong challenge of being an actor. Kasi, each day, each role is very different and it should be different kasi you're only good as your last role."

Completing the cast of "Ganti ng Puso" are Bianca King, Arci Muñoz, and Daria Ramirez under the direction of Dominic Zapata.

A VENGEFUL STORY. Ganti ng Puso is a story entwined by forces of deceit, love, and vengeance. Each character, Geoff said, "is actually connected with everyone."

There's Jacob Manansala (Marvin Agustin), a man with a firm desire to claim what's rightfully his. He's willing to fight tooth and nail for the riches taken from his father.

Then, a mother named Viola Ojeda (Sheryl Cruz) goes all out to achieve her hard-fought dreams. She selfishly chose to abandon her child for a more comfortable and properous life.

Geoff plays the role of a son who wickedly schemes for power and wealth. His ambitious ploys for prestige will drive him to fiendish revenge.

Catch the pilot episode of this eight-part drama on Thursday, March 26, after Fated to Love You on GMA-7.