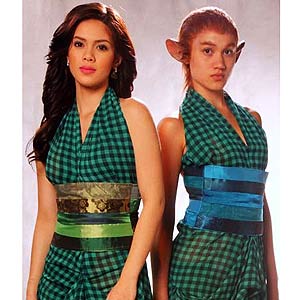 The story of Jim Fernandez's Kambal sa Uma was originally read by avid readers of Pinoy komiks. Then, it was adapted on the big screen in 1979, which starred actress Rio Locsin. On Monday, April 20, Pinoy audiences will see the fate of two rat-like ladies in the TV adaptation of Kambal sa Uma on ABS-CBN's Hapontastic.

The afternoon slot was seen by directors Manny Palo and Rechie del Carmen as a challenge to keep their viewers glued to their television sets.

Since this show was based on a Pinoy komiks novel, Direk Rechie admitted that they had to do a little change on it story so it could fit the schedule for a drama series.

Kambal sa Uma features young actresses Shaina Magdayao and Melissa Ricks. They will play the role of the two young ladies—Vira and Ella, respectively—who have the physical features of a rodent. They will be separated from each other when their mother Milagros (played by the original Kambal sa Uma actress Rio Locsin) tries to save them from the persecution of the people in their town. Vira will be given away and will end up in the care of a rich couple namely Lourdes and Aurelio (Lotlot de Leon and Allan Paule). On the other hand, Ella, who has more prominent features of a rat, remained with her mother and lived in the mountains. When they grew older, these twin sisters will meet again and their differences will lead to a bitter clash.

Find out the real identities of Ella and Vira in Kambal sa Uma starting this afternoon, April 20, on ABS-CBN's Hapontastic, right after Wowowee.