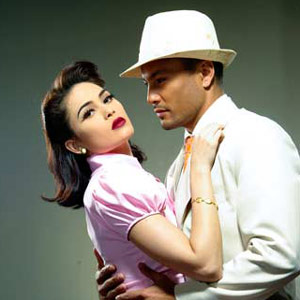 The story of Maruja tackles the idea of reincarnation and a love that lasts throughout the centuries. Cristy Rivera (Kristine Hermosa) is the reincarnated Maruja who has paranormal abilities. Her special gift allows her to help lost souls finish their unresolved earthly duties. The magazine columnist is constantly getting vivid dreams about a mysterious man but her only clue is the name Gabriel. As the story progresses, the faceless man in her dreams will slowly reveal himself.

This Saturday afternoon series will air its pilot episode on ABS-CBN on May 2, 2009. Komiks Presents Mars Ravelo's Nasaan Ka Maruja airs right after Cinema FPJ. It replaces the timeslot of Flash Bomba.

During the general press conference of Maruja held at ABS-CBN last April 21, he told the press: "Nung ni-rinemake ito [the 1996 version of Maruja], si Direk Joey yung director and ako yung assistant director. Nung ginagawa ko ‘to [2009 version] sabi ko, ‘this is close to my heart' and I did this before plus the fact that maganda talaga yung story."


SYNOPSIS. In the original komiks published in the ‘60s,Nasaan ka Maruja? told the story of Maruja and Gabriel, a couple madly in love with each other. However, Maruja's mother disapproved of their relationship. Maruja was forced to marry another man, and she took her own life right after the marriage, with a promise to Gabriel that they would be reunited someday. A hundred years later, Maruja was reincarnated as Cristy and was finally reunited with an aged and dying Gabriel.


In the television version, Cristy Rivera (Kristine Hermosa) is a magazine columnist who possesses psychic abilities that help her see dead people. She has a half-sister named Helen (Karylle) who is engaged to Ross Lozano (Derek Ramsay). Cristy is unaware of the fact that as a child, Ross used to draw sketches of Maruja even before they met in real life.


Meanwhile, another man is also captivated by Cristy's beauty and personality. Michael(John Estrada), the editor-in-chief of the magazine where Cristy works, is also in love with her.

Menggie Cobarrubias plays Alfred, Cristy and Helen's father while Bing Pimentel plays Alfred's second wife named Shirley. She finds it hard to accept her Cristy as her stepdaughter, causing conflict in the story.