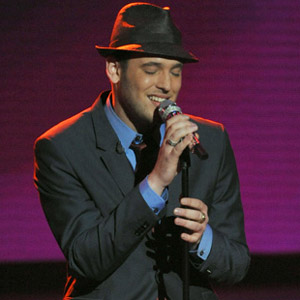 The "Rat Pack" era certainly evoked romantic and sentimental strains of the 1950s and 1960s. This week in American Idol Season 8, the top 5 finalists were given the opportunity to do their own interpretation of timeless standards. The guest mentor for this week was multi-awarded actor and singer Jamie Foxx.


Looking dapper in his suit, Kris Allen crooned a favorite standard "The Way You Look Tonight." Randy thought it was his "best performance to date." Kara believed that Kris is "truly a dark horse in the competition."

Allison Iraheta's did a classic take on "Someone to Watch over Me." Paula found her performance "alluring and tender." Simon commented, "It's a great performance. I have a horrible feeling that she will be in trouble tonight.


Matt Giraud was third in line and performed "My Funny Valentine." Simon was quick to note that it was a "believable, authentic song. Absolutely brilliant." However, Kara thought she didn't feel "emotionally connected well together to the song."


Danny Gokey conquered the stage with "Come Rain or Come Shine" and impressed the judges immensely. Randy remarked, "he can sing and can make an album with those kinds of songs. " Kara gawked at Danny and claims that he has the "rat pack swagger. It was unbelievable." Danny's song act was a "stellar performance" for Paula.


Adam Lambert should definitely feel good about his song choice, "Feeling Good," since the judges certainly appreciated it. Simon thought Adam made "the best entrance of the year" and Randy said Adam is "in the zone. Another good performance."


First-rate performances from the "unforgettable" Natalie Cole who sang "Something's Gotta Give," Taylor Hicks from American Idol Season 5 performed "Seven Miles Breakdown and Jamie Foxx brought his own sparks to the show.


With Matt Giraud gone, the four remaining contenders—Kris, Adam, Danny and lone female Allison—will compete against each other for "Rock n Roll" week with Slash in next week's competition.