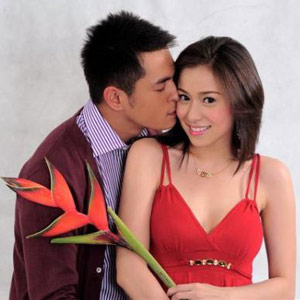 ABS-CBN business unit head Laurenti Dyogi recalls that he was in Europe when he first read a pocketbook romance novel.

"Someone handed me a book during Pinoy Big Brother in Europe," said Direk Lauren during the general press conference of Precious Hearts Romances presents Bud Brothers. "We made a tie-up with publisher Jun Matias and hopefully, we will have a long partnership since Bud Brothers will run for 13 weeks."

He added: "We really wanted to try something new on non-primetime television. We also hope to discover new tandems and use that for television or in the movies."


For this reason, most of the love teams in Bud Brothers are new pairings such as the first episode called "Stupid Cupid" starring Jake Cuenca and Cristine Reyes.

Precious Hearts Romances has been entertaining Filipino readers for the past 18 years. Aside from producing Bud Brothers for television, ABS-CBN has also expressed interest in producing the Kristine series written by Martha Cecilia.


SYNOPSIS. Bud Brothers is a collection of eight interconnected love stories all written by Rose Tan. The TV series revolves around college fraternity brothers who put up their own business, called the Bud Brothers Flower Farm, and the quirky yet gorgeous women these men will fall for.


Jake and Cristine star as Vince and Georgina in "Stupid Cupid," which will begin airing today, May 4.


Pio (Ahron Villena) is the one mainly in charge of the Bud Brothers Flower Farm. When he decides to marry his long-time girlfriend Sandy (Maricar Bautista), Pio calls on his Bud Brothers to come to his wedding. But the ceremony that is supposed to be the culmination of Pio and Sandy's relationship will turn out to be the beginning of a journey to love and self-discovery for the members of the Bud Brothers.

In the pilot week, get to meet Vince (Jake Cuenca). He gets a big surprise when his college sweetheart Georgina (Cristine Reyes) shows up with a baby girl. Georgina asks Pio's help for a place to stay in until she figures out a way to fend for the baby. Pio agrees to help, but at the same time, he seizes the opportunity to play a joke on Vince.

Thinking that he had moved on from his breakup with Georgina, Vince is shocked to find his ex in the shower. As the two start to live under one roof, unresolved issues from their past relationship are dug up again, and they begin to get into each others' nerves. But while Vince and Georgina think that there is no way they can live closely with one another, they also realize that being apart is much harder. Vince and Georgina will try to deny their feelings, afraid that they may end up hurting each other again. But they will later learn that love is really sweeter the second time around.

In the story of "Betsy, Wow Golly Wow," Mariel Rodriguez is cast as Betchay, a quirky applicant for the secretarial stint in the flower shop. Rafael Rosell is Wayne, a bachelor who hires Betchay to be his wife. Will this pretend love turn into his preferred life?


Ahron Villena and Maricar Reyes are Pio and Sandy, a lovely couple who oversee the travails and perks of the blossoming young love and budding maturity of the Bud Brothers while facing their own trials in the greatest test of love--to start off from a ‘happily ever after' fantasy to a ‘still happy after' married reality.

Will Devaughn and Valerie Concepcion will bring a different taste of kilig and excitement in "Once in a Lifetime Love."Monty, the indecisive lady's man among the boys, will fall in love with the seductive Isabel (Valerie Concepcion).

In "He's the One," Manuel Chua is Ed Lacson, the pretty boy model who could lure men and women alike. His biggest challenge is to allure rival flower shop owner Hiromi (played by Janna Dominguez).

Guji Lorenzana and Roxanne Guinoo get together for "Pepper's Roses." Ray is a serious and artsy band frontman while Pepper is an artist who loves children and art. They are actually childhood friends who have a mission to patch things up between their parents. They soon discover that their true mission is to fall in love.

John Prats will tickle funnybones via his character named Carlo in "Funny Love." He is the real life Mr. Congeniality and the Bud Brothers' part-time lover, full-time clown. He is paired with Denise Laurel who is cast as Coco. She is a grieving widow who moves away from home in search for peace but discovers a new love.

The story of "Pete and Tammy" will be portrayed by Joem Bascon and Wendy Valdez. Pete is a mama's boy who relies on fate and his mother when it comes to making decisions. Upon meeting Tammy, he must learn to grow up and be a man for his loved one.