Ruffa Gutierrez to replace Kris Aquino on 'The Buzz' 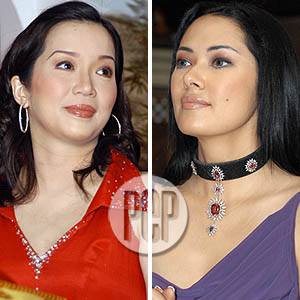 The Buzz co-host Kris Aquino announced last week that she will be on a showbiz hiatus for the next two months, or at least until she gives birth to Baby James—her son with husband James Yap.

Kris has said in the past that the emotional stress from the controversy surrounding her marriage to the Philippine Basketball Association (PBA) cager—who was reportedly involved with another woman, a clinic receptionist named Hope Centeno—has endangered her health and pregnancy.

The seven-month pregnant Kris wrote in her official statement, "I now say a temporary goodbye to all of you. In the coming weeks, my one focus is to be the best mom I can possibly be to Josh and his baby brother. The only way I can succeed at this is to leave the spectacle behind me and totally retreat from the public eye...

"Please know how I will miss being a part of your daily TV viewing. I've always said that my career's biggest blessing is that all of you who has tuned in to my shows allowed me to become a part of your family.

"And now, it's my turn to focus on the two people that really matter in my life, my two biggest blessings, my two sons—Josh and Baby James. At the end of the day, after all has been said and done, my ability to give them good lives is what matters most."

The TV host-actress is seen seven times a week with her three shows in ABS-CBN: Kapamilya Deal or No Deal, Pilipinas GAME K N B?, and The Buzz.

Kapamilya Deal or No Deal has already ended its first season. Pilipinas, GAME K N B? has chosen Edu Manzano to temporarily host the game show.

What about The Buzz?

There has been talk that Kris personally requested that her good friend Ai-Ai delas Alas replace her, but three other names also came up—Ruffa Gutierrez, Gretchen Barretto, and Rosanna Roces.

"This Sunday, definitely it's gonna be me," says Ruffa.

In a text message sent to PEP (Philippine Entertainment Portal), Ruffa confirms that she will be replacing Kris as co-host this weekend. She also says that viewers should watch for the show because she will be interviewing the ever controversial Gretchen Barretto.