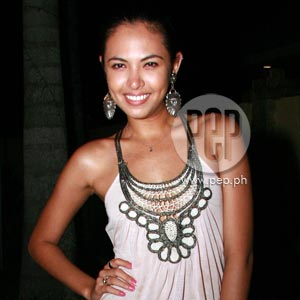 
Most Wanted Question # 5: You said in your FHM interview that you are a bit rebellious. What is the most rebellious thing that you have ever done so far at the age of 20 years old?

"Hmmm...I guess I'm a little bit of both. Halo-halo. Kasi, I'm 20. People my age would also want to have fun. I think there's a bad girl in everybody. I feel like once in your life, magiging rebellious ka talaga.

So, what did you learn?

"What did I learn? I learned to be more feminine. Medyo ano ko rati, immature. Nanalo ako, 17 lang ako noon, so, bagets talaga ko nun. When I won, I turned into a woman. I stopped doing certain things like going out and watching rock bands, which I love to do! Hahaha!"

"Actually hindi, ganito ang nangyari. We were sitting dun sa gilid ng stage noong tinatanong siya ni Paolo Bediones. When she opened her mouth on the first five seconds, I was in shock. I was saying, 'Oh my god, Oh my god!' She was starting answering the questions so, I was like, just shut up, just shut up. Just stop talking na.

"Of course, I didn't expect her to win. So when they announced that she's gonna replaced me, I was shocked."

Yung pagiging shocked niya was disagreement with the decision of the judges?

"Well I think, if you're gonna represent the country, you do have to have something up there. You have to be smart. You're a beauty queen and you're representing the Philippines. People expect much from you.

"She's a nice girl, though, I've talked to her. But in all honesty, if she really, really wanna be somebody, be a beauty queen, all she has to do is open a book and read."


Mo's Wanted Question # 2: Have you ever had any secret intimate relationship with a celebrity guy? Sino siya?

Are you currently dating Jon Avila?

"Well, we're hanging out. We're seeing each other. Stuff like that."

How true that when you were in Boracay, some people saw you kissing Jon?

"Maybe, Hahaha! Well, no, actually, I've known Jon for years. Matagal ko na siyang kilala. Palagi siyang may girlfriend. Palagi akong may boyfriend. So now, we're both single, so, we're just out there to have fun."

"And you what, if she has problem with Dani, that's her issue. But if she needs me, I'll be there."

Because of your rebellious side, it's like don't mess with Maggie or else, mang-aaway ka talaga?

"Ah hindi, ano naman ako, I'm a mature person. In that sense na kapag inaway ako, we can sit down and talk about it like adult. Not throw hands in the air, walang sabunutan."