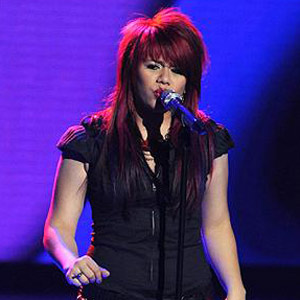 The feisty redhead from Los Angeles, California was eliminated from American Idol Season 8, leaving behind three males to battle it out to become the next singing sensation in the United States.

"Rock Night" was the theme for this week in American Idol and no less than legendary guitarist Slash mentored the contestants in rock 'n roll fashion. Pumped up with excitement were judges Randy Jackson, Simon Cowell, Paula Adbul and Kara DioGuardi.

For the first time, the Idol hopefuls were paired up to perform a duet but they also got to showcase individual numbers.

Adam Lambert wowed America with an electrifying act with "Whole Lotta Love," a Led Zeppelin classic. All four judges were blown away by his performance. Randy said, "This is the Adam that I love. You and Slash should do a record.... that was hot!" Kara gushed: "You are more than a rock star. You're a rock god!"

A Janis Joplin song titled "Cry Baby" was the song choice of Allison Iraheta. Unfortunately, it could literally induce tears for the 17-year old singer because of the consequences it entailed. Simon found her "trying too hard to sing like the original. A sound-a-like. I wouldn't have chosen that song." Kara commented, "I think that you transform when you go onstage. You become larger than life." Paula further added that she was "downright fearless."

Performing as duo for the song "Renegade" were Danny Gokey and Kris Allen. Randy "liked the harmony. You complement each other. "Simon blurted out, "Danny, you're better than Kris."

After their duet, Kris performed solo the classic Beatle song "Come Together," which didn't earn raves. Kara believed that Kris is "definitely the softer side of rock. Not a great performance. [You're] trying too hard." Paula noted: "It's kinda risky doing a Beatle song...You are an artist on stage. You need to have a little energy."

Danny did his own take on "Dream on" by Aerosmith and the judges observed he was out of his element. Randy observed, "This is not your genre. This is just alright for me. I'll give you an ‘A' for valued effort for hitting that high note." Simon sharply commented, "That high note was like watching a horror movie."

It was Adam and Allison's turn to pair up and they impressed them all with "Slow Ride." Simon summed it up by saying, "In the battle of the duets, you won the show tonight!"

Before winding up the show, Slash—the former Guns N' Roses guitarist and current member of Velvet Revolver—performed with his "students" for the song "School's Out."

American Idol judge Paula Abdul also performed "[I'm Just] Here For The Music," the first single from her upcoming album. This marked the first time that she has taken the Idol stage as a performer.

Former fifth-season finalist Chris Daughtry performed "No Surprise," the first single from their upcoming second album titled Leave this Town. It will be released in the United States by July 14.

When the votes were finally read, the top four became a top trio with rocker chic Allison Iraheta packing her bags.

With the female singer out of the game, expect an intense showdown from Adam Lambert, Danny Gokey and Kris Allen in next week's competition as the eighth-season finalists receive a "hero's welcome" from their respective hometowns.