Who will win in The Amazing Race Season 14? 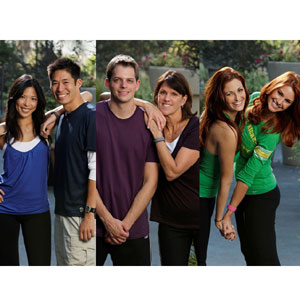 The finalists of The Amazing Race 14 are (from left) lawyer siblings Tammy and Victor, mother and son Luke and Margie, as well as former NFL cheerleaders Cara and Jaime.
Whoever wins among the three remaining teams in the race around the world will make history in the Emmy award winning reality competition program The Amazing Race.

Sibling lawyers Tammy and Victor seek to be the series' first Asian American team to win, Margie and Luke try to become first winning mom and son team, while Cara and Jaime can be the first all female team to win.

The three final teams would have traveled 40,000 miles around the world in 22 days when they finish the race. TAR Season 14 had eleven teams going to countries like Switzerland, Germany, Austria, Romania, Russia, India, Thailand, China, and the United States.

Despite overcoming the challenges in the swimming pool and the language difficulty at a Chinese restaurant, Kisha and Jen were the last to arrive at the Beijing National Stadium and got eliminated.

Kisha dispelled notions that they lost the race because her sister had to make a stop at a toilet instead of dashing to the pit stop.

"All we know is that it was minutes. How many minutes? We're not really sure, but definitely, it was not seconds," she said in an interview.

Both said they did not regret the way they played the game and did not dwell much on their rift with mom and son team Margie and Luke.

"It was just disappointing to witness them blowing the situation out of proportion because everyone saw from the tape what exactly happened. It was absolutely ridiculous and upsetting," Jen said.

Kisha and Jen will join the other seven eliminated teams at the finish line in the next episode to cheer and welcome the winners of the race.

Find out who will be the 14th winning team as Studio 23 airs the exciting final episode live via satellite on Monday (May 11) 8:00 AM with a primetime telecast on Tuesday (May 12) 8 PM.
Read Next
Read More Stories About
TV, television
Post a Comment
Featured
Latest Stories
Trending in Summit Media Network