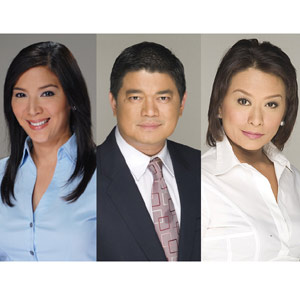 (From left) Pinky Webb, Julius Babao, and Ces Drilon will lead the campaign "Boto Mo, iPatrol Mo: Ako Ang Simula." A mini-concert will be held on May 11 at the Music Museum titled 365 Days to Change...Todo Na 'To. ABS-CBN anchor Atom Araullo (not in photo) will be hosting the event.
ABS-CBN is launching on Monday, May 11, its year-long campaign to encourage Filipinos to begin taking an active role in the upcoming 2010 Presidential elections.

"Boto Mo, iPatrol Mo: Ako Ang Simula" calls on Filipinos, especially the youth, to get involved this early by registering as voters and closely watching preparations for the 2010 race.

"Many young Filipinos have become apathetic and cynical that real change can ever happen in the country," said ABS-CBN senior vice president for News and Current Affairs Maria Ressa. "But we are telling them to have faith and do something about it. We have one year to change traditional politics in our country and we are empowering them through this multimedia campaign."

Ressa said young Filipinos can initiate change as early as now by registering to vote. ABS-CBN will be setting up voter registration booths on May 11 in Metro Manila, Pampanga, Cebu, and Davao.

She also urged people to join the campaign and sign up at "Boto Mo, I-Patrol Mo" (BMPM) booths this Monday. Ressa added, "We successfully used BMPM in 2007—when Filipinos across the country used their cellphones to report anomalies, violence and payoffs during elections—the first time ever that mobile technology was used for a political purpose—to patrol the votes." Now we are taking it one step further—using television, radio, cable TV, the Internet and mobile phone technology to empower Filipinos to push for change across ABS-CBN's multiplatform structure, which encompasses television, radio, cable TV, the Internet, and mobile technology.

The May 11 activities will begin in ABS-CBN's top-rating morning show Umagang Kay Ganda, which will be held at the historic La Salle gymnasium in Greenhills, where the first quick election count was held in 1986. A voter and BMPM registration booth will be set up in La Salle.

ABS-CBN Newsgathering head Charie Villa said ABS-CBN News teams will also be deployed in Pampanga, Cebu, and Davao where they will report on voter registration in these areas and the current political situation there. For the entire day, ABS-CBN's Ces Orena Drilon will be anchoring from Davao; Julius Babao from Cebu; and Pinky Webb from Davao.

Voter registration and BMPM booths will be set up in San Fernando Plaza in San Fernando, Pampanga; Plaza Independencia in Cebu City; and People's Park in Davao City.

In the evening, ANC, the ABS-CBN News Channel, will be bringing together for the first time the reported presidential aspirants at a leadership forum at the Ateneo de Manila University in Quezon City. The forum will be aired live from 7 pm to 9 pm, also on Monday. Confirmed guests as of May 7 are Senators Panfilo Lacson, Francis Escudero, Mar Roxas, Richard Gordon; Pampanga Gov. Ed Panlilio; and Defense Secretary Gilbert Teodoro.

ABS-CBN is partnering with Artist Revolution and YouthVote Philippines who will be staging a mini-concert on May 11 at the Music Museum at 8 pm titled 365 Days to Change...Todo Na 'To. ABS-CBN anchor Atom Araullo will be hosting the event.

Introduced in 2007, BMPM empowered citizens to patrol their votes by encouraging them to report election-related anomalies using new media. Its huge success didn't only spark citizen participation, it also enabled ABS-CBN to document illegal election practices all over the country. It has received recognition from the Philippine Quill Awards, the Anvil Awards, and the Gold Quill Awards.