Dabarkads give Danica and Marc a second honeymoon 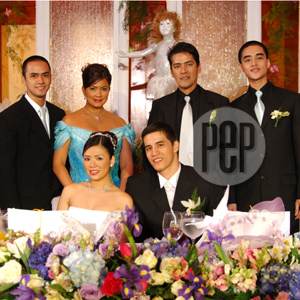 Vic Sotto and Dina Bonnevie (second from left, standing) pose for a family portrait with their brood (L-R, clockwise) Oyo, and Danica (seated). Vicco (rightmost, standing) is Vic's son with ex-partner Coney Reyes. The newest member of the family is Marc Pingris, the star forward of the Purefoods team. They were all photographed together during the March 3 wedding of Danica and Marc.

Danica Sotto isn't actually a member of the dabarkads, the group composed of Eat Bulaga! hosts, but being "Bossing" Vic Sotto's daughter makes her one of their own.

During the Pingris-Sotto nuptials last March 3 at Palms Country Club in Alabang, Muntinlupa, Eat Bulaga! hosts were present to witness the happy occasion. After the wedding, newlyweds Danica and Marc Pingris flew immediately to Boracay for their honeymoon.

Last Saturday, March 10, the newlyweds returned the favor by guesting in GMA-7's noontime show Eat Bulaga! Allan K shared that during Danica and Marc's honeymoon, they left behind their camera. He then presented the couple with a gift-wrapped box and urged them to open it. "Bossing" Vic then joked, "Wala bang gift [para] sa daddy?"

Danica's eyes widened at the mention of having children so soon. She responded by saying, "Gusto ko lang siyempre magpasalamat sa Eat Bulaga family, who has always been there for us...sa lahat ng hosts, sa daddy ko, Ate Ciara..."She rattled off a list of names and even thanked their church, Victory Christian Fellowship.

The crowd cheered while the other hosts prodded Marc to speak up. Vic finally got his son-in-law to talk when he asked, "Sa akin, wala ka bang message?"