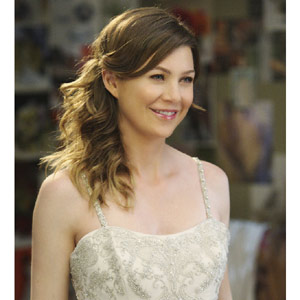 The union of Meredith Grey (Ellen Pompeo, in photo) and Derek Shepherd will be shown on the Studio 23 show Greys Anatomy next Monday, May 25.
Two of television's highly anticipated and must-see episodes are set to hit Philippine TV this May. Get fresh from the U.S. episodes of Grey's Anatomy and Desperate Housewives only on Studio 23.

The wedding day has arrived. America's hit medical drama invites you to the much-awaited union of Meredith Grey and Derek Shepherd this coming May 25 (Monday), 8 pm.

After the long wait and on/off relationship, Meredith (Ellen Pompeo) will finally walk down the aisle to say her vows to Derek (Patrick Dempsey). A group of college students heading to their graduation ceremony however got injured in a car crash on the big day and were admitted to the ER.

Izzie (Katherine Heigl), on the other hand, fears the worst when she begins experiencing familiar symptoms and pretends to be feeling well just to make it to her friends' wedding.

This episode dubbed as "What a Difference a Day Makes" will be the show's landmark 100th installment written by Shonda Rhimes and directed by Rob Corn. It is one of the most highly anticipated episodes of Grey's Anatomy that a website was even created for this on-screen wedding supposedly made and updated by Izzie who is the wedding planner.


Meanwhile, the neighborhood of Wisteria Lane is still in shock with the sudden death of Edie Britt (Nicollette Sheridan).

On Desperate Housewives this Thursday (May 14) at 9 PM, watch as the women look back on their friend's life. Susan recalls their first meeting, Lynette reflects on a memorable afternoon out, Bree is reminded of the thoughtfulness she bestowed upon Orson, and Gaby remembers fondly a night of friendly competition.

Teenage Mutant Ninja Turtles: Fast Forward premieres on June 1, 6:30 pm. Follow the adventures of the Ninja Turtles and Splinter as they are accidentally transported one hundred years into the future by Cody Jones, the great-grandson of Casey Jones and April O'Neil and heir to the O'Neil Tech business empire.