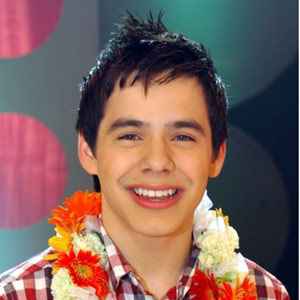 After hearing Kyla's interpretation of his song, David Archuleta exclaimed, "Filipinos are so good and amazingly talented!" He appeared on the GMA-7 morning show SIS earlier today, May 14.


American Idol Season 7 runner-up David Archuleta brought the house down when he performed live on the GMA-7 morning show SIS earlier today, May 14. For the finale of the show, he performed "A Little Too Not Over You," the second single released from his self-titled debut album.


Singers from the Kapuso Network serenaded him with their interpretation of David's own songs and American Idol hits like "Crush," "Long and Winding Road," "And I Am Telling You," "Angels," and "Touch My Hand."

David narrated that he started to sing at the tender age of six. "First thing that got me into music pretty much was when I watched the 10th anniversary tour of Les Miserables. I was 6 and I couldn't stop watching it!"

The first song he learned, also from Les Miserables, was "Castle on the Cloud."

He also considers Kelly Clarkson, American Idol Season 1 winner, as the most influential person in his life. "She's one of the people I really admire and look up to," he said.

One of the most awaited finale nights in the history of the American Idol was the battle of the Davids wherein his namesake, David Cook, emerged as the winner American Idol Season 7.

Despite of his loss in the past AI season, David has become a popular singer not only in the United States but other countries as well.


A native of Utah, David was known for his pop ballads throughout the show. In August 2008, he released his first single, Crush, from his self-titled debut album. It ranked at No. 2 on its first release at the Billboard Top 100, beating Rihanna's Disturbia. As of March 2009, the self-titled album that was released in November 2008, sold over 690,000 copies across the United States.

IMPRESSED BY FILIPINOS. David revealed that he is a huge fan of Jason Mraz, along with his other favorite performers Michael Jackson, Stevie Wonder, John Mayer, Natasha Bedingfield, Natalie Cole, Mariah Carey, and a lot more.

"These people have an impact on me. I love music!"

David is also fond of Philippine mangoes. "Yeah, I love mangoes. I ate two of them this morning."

After hearing Kyla's interpretation of his song, David exclaimed, "Filipinos are so good and amazingly talented!"


And after Pinoy Pop Superstar balladeer Harry Santos sang his piece, David quipped, "It's like, I feel stupid being here now. It was like, oh my gosh, why am I here?"

He described the Kapuso singers as "perfectly harmonized."

David then thanked the Pinoy fans who warmly welcomed him in his first visit in the country. "I'm like so amazed by, like how many fans are right here. Thank you guys so much! It's been great so far and I'm really excited on Saturday!"

A lot of young people look up to David but the 18-year-old singer said that this was not planned. "It's really cool. It's not like I was trying to be a role model. You just have to be yourself!"

"Knowing that, trying to, you know, trying to be a good person even though I'm weird and stuff. It's good to know that it helps kids and you know, to see that they are inspired to music."

GIFTS FROM SIS. During the latter part of the show, SIS hosts Carmina Villaroel, Gelli de Belen, and Janice de Belen presented their gifts to David. When he opened one of the gift boxes, David thought it was a shirt but it turned out to be a Barong Tagalog designed by Pepsi Herrera.

Miniature Filipino symbols like a jeepney, an ice cream cart, a Juan dela Cruz figure wearing a barong Tagalog, and a tiny nipa hut and a coconut tree inside a bottle were also given to him.

David Cook and David Archuleta Live in Manila! will be held this Saturday, May 16, (8 p.m.) at the SM Mall of Asia Open Grounds, Pasay City. Tickets are available at all Ticketworld and Ticketnet outlets.